Daddy Needs a Drink: An Irreverent Look at Parenting from a Dad Who Truly Loves His Kids-- Even When They're Driving Him Nuts (Paperback) 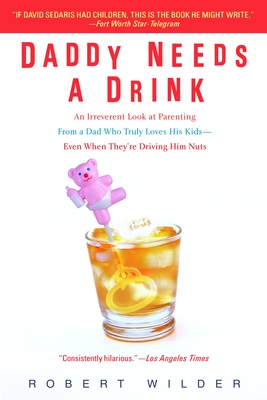 In the tradition of Dave Barry, an irreverent look at fatherhood from a dad who truly loves his kids—even when they’re driving him nuts.

“Robert Wilder’s hilarious and boldly candid essays about the realities of parenting go down like gin and tonic on a hot summer afternoon.”—People

A Santa Fe dad shares heartwarming, comic, often ludicrous tales of raising a family in this laugh-out-loud book perfect for anyone who enjoys the edgy humor of David Sedaris or the whimsical commentary of Dave Barry. Waxing both profound and profane on issues close to a father’s heart—from exploding diapers to toddler tantrums, from the horrors of dressing up as Frosty the Snowman to the moments that make a father proud—Robert Wilder brilliantly captures the joys and absurdities of being a parent today.

With an artist wife and two kids—a daughter, Poppy, and a son, London—Robert Wilder considers himself as open-minded as the next man. Yet even he finds himself parentally challenged when his toddler son, London, careens around the house in the buff or asks the kind of outrageous, embarrassing questions only a kid can ask. A high school teacher who sometimes refers to himself jokingly as Mister Mom (when his wife, Lala, is busy in her studio), Wilder shares warmly funny stories on everything from sleep deprivation to why school-sponsored charities can turn otherwise sane adults into blithering and begging idiots.

Whether trying to conjure up the perfect baby name (“Poppy” came to his wife’s mother in a dream) or hiring a Baby Whisperer to get some much-needed sleep, Wilder offers priceless life lessons on discipline, potty training, even phallic fiddling (courtesy of young London). He describes the perils of learning to live monodextrously (doing everything with one hand while carrying your child around with the other) and the joys of watching his daughter morph into a graceful, wise, unique little person right before his eyes.

By turns tender, irreverent, and hysterically funny, Daddy Needs a Drink is a hilarious and poignant tribute to his family by a man who truly loves being a father.

Robert Wilder is a writer and teacher who lives with his wife and two children, Poppy and London, in New Mexico. He has appeared on NPR's Morning Edition, and has a monthly column for the Santa Fe Reporter also called "Daddy Needs a Drink."

"Wilder's collection is spiced with sharp-eyed but never cruel observations of kids' befuddling behavior and hilarious scatology…. His love for his family comes through without ever seeming cloying…. Capture[s] the absurdity and joy to be found in the most important job a man can do."—Los Angeles Times

“Robert Wilder’s hilarious and boldly candid essays about the realities of parenting go down like gin and tonic on a hot summer afternoon.”—People

"More profane, more ironic and at times more touching than a whole stack of well-meaning child-rearing manuals....Even if your husband or father or brother isn't much of a reader, Daddy Needs a Drink would be sure to make him laugh."—Cleveland Plain Dealer