All the Wrong Places: A Life Lost and Found (Hardcover) 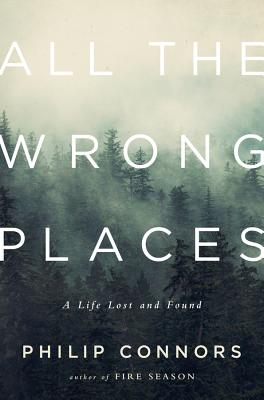 The prize-winning author of Fire Season returns with the heartrending story of his troubled years before finding solace in the wilderness.

In his debut Fire Season, Philip Connors recounted with lyricism, wisdom, and grace his decade as a fire lookout high above remote New Mexico. Now he tells the story of what made solitude on the mountain so attractive: the years he spent reeling in the wake of a family tragedy.

At the age of twenty-three, Connors was a young man on the make. He'd left behind the Minnesota pig farm on which he'd grown up and the brother with whom he'd never been especially close. He had a magazine job lined up in New York City and a future unfolding exactly as he’d hoped. Then one phone call out of the blue changed everything. All the Wrong Places is a searingly honest account of the aftermath of his brother's shocking death, exploring both the pathos and the unlikely humor of a life unmoored by loss.

Beginning with the otherworldly beauty of a hot-air-balloon ride over the skies of Albuquerque and ending in the wilderness of the American borderlands, this is the story of a man paying tribute to the dead by unconsciously willing himself into all the wrong places, whether at the copy desk of the Wall Street Journal, the gritty streets of Bed-Stuy in the 1990s, or the smoking rubble of the World Trade Center. With ruthless clarity and a keen sense of the absurd, Connors slowly unmasks the truth about his brother and himself, to devastating effect. Like Cheryl Strayed's Wild, this is a powerful look back at wayward years—and a redemptive story about finding one's rightful home in the world.

Find room on your bookshelf next to Wallace Stegner and Norman Maclean; Philip Connors is here to stay.
— Alexandra Fuller

Philip Connors probably had to write All the Wrong Places for his own peace of mind; but in the process, he has given all readers a gift. As this sparklingly well-written memoir bores deeper toward the heart of something that cannot be understood, it keeps getting impossibly better, becoming that much more absorbing, that much more tender, more thoughtful, wry, and heartfelt. This is a marvelous book.

Philip Connors is one hell of a storyteller.
— Sean Wilsey