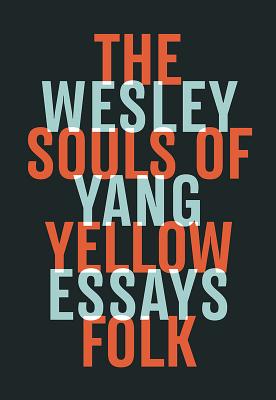 One of the most acclaimed essayists of his generation, Wesley Yang writes about race and sex without the jargon, formulas, and polite lies that bore us all. His powerful debut, The Souls of Yellow Folk, does more than collect a decade’s worth of cult-reputation essays—it corrals new American herds of pickup artists, school shooters, mandarin zombies, and immigrant strivers, and exposes them to scrutiny, empathy, and polemical force.

In his celebrated and prescient essay “The Face of Seung-Hui Cho,” Yang explores the deranged logic of the Virginia Tech shooter. In his National Magazine Award–winning “Paper Tigers,” he explores the intersection of Asian values and the American dream, and the inner torment of the child exposed to “tiger mother” parenting. And in his close reading of New York Magazine’s popular Sex Diaries, he was among the first critics to take seriously today’s Internet-mediated dating lives.

Yang catches these ugly trends early because he has felt at various times implicated in them, and he does not exempt himself from his radical honesty. His essays retain the thrill of discovery, the wary eye of the first explorer, and the rueful admission of the first exposed.

As Yang’s avid followers already know, his laser scrutiny spares no one—not even Yang himself.
— The Millions

Yang writes with elegance and a fearless interest in the uncommon and unsayable.
— Booklist

[A] perceptive, personal view of the lives of Asian-Americans.
— Kirkus Reviews

Nobody writes sentences (or profiles) like Wesley Yang. He is our Balzac.
— Elif Batuman, author of The Idiot

This is a spectacular essay collection, as eloquent and stylishly written as it is morally essential. With lucidity and unsentimental humanity, Wesley Yang shows us a new type of forgotten man, one whose suffering is primarily psychological. We often think of the brutality of private life as the natural province of fiction or memoir, but Yang combines the novel’s power to dissect personal psychology with the breadth, directness and raw honesty of the essay. A stunning achievement, this book deserves to be read and re-read for years to come.
— Adelle Waldman, author of The Love Affairs of Nathaniel P.

A terrifically honest writer, Wesley Yang articulates feelings others are too afraid to call up, let alone confront. This collection is essential because it adheres to no ideology; Yang panders to no one. Instead, with sharp, and even Naipaulian, prose, he takes us deep into the discomfort zones of racial and political discourse.
— Karan Mahajan, author of The Association of Small Bombs

Wesley Yang’s pen is sharp, his imagination adventurous and his empathy devastating. His words snap a messy world into focus.
— Molly Young, author of D C-T!