The Divide: Global Inequality from Conquest to Free Markets (Hardcover) 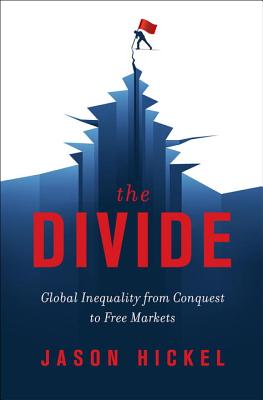 Global inequality doesn’t just exist; it has been created.

More than four billion people—some 60 percent of humanity—live in debilitating poverty, on less than $5 per day. The standard narrative tells us this crisis is a natural phenomenon, having to do with things like climate and geography and culture. It tells us that all we have to do is give a bit of aid here and there to help poor countries up the development ladder. It insists that if poor countries would only adopt the right institutions and economic policies, they could overcome their disadvantages and join the ranks of the rich world.

Anthropologist Jason Hickel argues that this story ignores the broader political forces at play. Global poverty—and the growing inequality between the rich countries of Europe and North America and the poor ones of Africa, Asia, and South America—has come about because the global economy has been designed over the course of five hundred years of conquest, colonialism, regime change, and globalization to favor the interests of the richest and most powerful nations. Global inequality is not natural or inevitable, and it is certainly not accidental. To close the divide, Hickel proposes dramatic action rooted in real justice: abolishing debt burdens in the global South, democratizing the institutions of global governance, and rolling out an international minimum wage, among many other vital steps. Only then will we have a chance at a world where all begin on more equal footing.

Jason Hickel is an award-winning professor of anthropology at the London School of Economics. His research focuses on globalization, development, and political economy, and he writes regularly for the Guardian. He lives in London.

Advocates a strategy of development focused less on material consumption and more on meeting the basic human needs. Accessible to all readers, Hickel's revealing and sometimes angry critique will spur deeper thought about the inequities of the global economy.
— Library Journal (starred)

Penetratingly explores those forces that perpetuate global inequality and shreds the notion that the fissure between rich and poor is anything other than intentional.
— Publishers Weekly

Sharply argued. . . . Sure to distress the neoliberals in the audience but a powerful case for reform in the cause of economic justice.
— Kirkus Reviews

An evolutionary leap in our understanding of inequality and poverty. [The Divide] should be required reading for anyone hoping to realize a better world.

In this iconoclastic book, Jason Hickel shakes up the prevailing paradigm of ‘development.’ . . . [The Divide] will radically change the way in which you understand the workings of the global economic system and the challenges faced by poor countries trying to advance within it.

— Ha-Joon Chang, University of Cambridge, author of 23 Things They Don’t Tell You about Capitalism and Economics: The User’s Guide

A book that crackles with facts, indignation, and heart. Why hasn’t global poverty and hunger really declined in the last decades?…Journalists, aid workers, and anybody who has ever given aid (i.e., nearly everybody) should read this book.
— Antony Loewenstein, author of Disaster Capitalism

The Divide is exceptional, necessary, and essential…Written in a captivating and easy-to-read style, this book must become the standard text for everyone studying, working, or interested in development.

With passion and panache, Jason Hickel tells a very different story of why poverty exists, what progress is, and who we are. The Divide is myth busting at its best.

— Danny Dorling, author of Inequality and the 1%