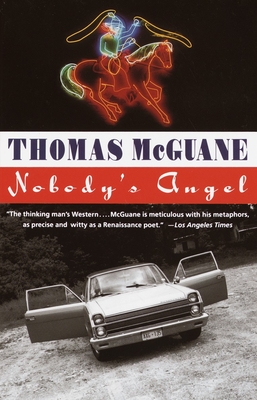 A novel about a former soldier in Big Sky Country whose life is spiraling out of control, from the acclaimed author of Ninety-two in the Shade and Cloudbursts, who is "among the most arresting and fascinating [writers] of his generation" (San Francisco Chronicle).

In McGuane's first novel set in his famed American West, Patrick Fitzpatrick is a former soldier, a fourth-generation cowboy, and a whiskey addict. His grandfather wants to run away to act in movies, his sister wants to burn the house down, and his new stallion is bent on killing him: all of them urgently require attention. But increasingly Patrick himself is spiraling out of control, into that region of romantic misadventure and vanishing possibilities that is Thomas McGuane's Montana. Nowhere has McGuane mapped that territory more precisely—or with such tenderhearted lunacy—than in Nobody's Angel, a novel that places him in a genre of his own.

THOMAS McGUANE lives on a ranch in McLeod, Montana. He is the author of ten novels, including the National Book Award-nominated Ninety-two in the Shade, three works of nonfiction, and four collections of stories. His work has won numerous awards, including the Rosenthal Award of the American Academy and Institute of Arts and Letters, and has been anthologized in the Best American Stories, Best American Essays, and Best American Sporting Essays.

"The thinking man's Western.... McGuane is meticulous with his metapghors, as precise and witty as a Renaissance poet." —Los Angeles Times

"A novel of considerable compassion, strength, and resonance, from an author who's among the most arresting and fascinating of his generation." —San Francisco Chronicle

"A masterpiece ... arguably one of the best serious novels of recent times, [with] a mastery of style and invention, delighting the reader with [McGuane's] pure command of the language." —Indianapolis News

"McGuane's prose is witty and evocative.... Montana is to McGuane what Yoknapatawpha County was to Faulkner, a mythic place of discovery. This is a rewarding book, full of small truths." —People