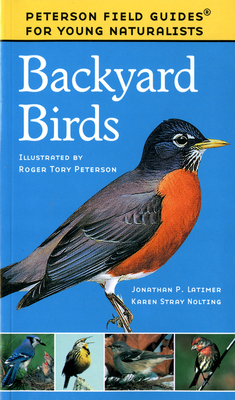 Backyard Birders, part of the Peterson Field Guides for Young Naturalists series, includes:
▪ The birds you are most likely to see in the backyards of North America
▪ The Peterson Identification System which uses life-like illustrations and provides the best method for bird identification
▪ Vibrant color photographs of birds in their natural habitats
▪ Easy-to-use design that helps beginners succeed and have fun

For more than 85 years, Peterson Field Guides have set the standard by which other field guides are measured. Comprehensive and authoritative, they are essential additions to any naturalist's bookshelf or backpack.

ROGER TORY PETERSON, one of the world’s greatest naturalists, received every major award for ornithology, natural science, and conservation as well as numerous honorary degrees, medals, and citations, including the Presidential Medal of Freedom. The Peterson Identification System has been called the greatest invention since binoculars.