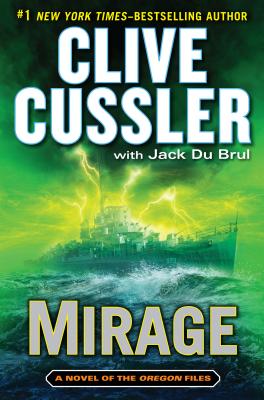 This is book number 9 in the Oregon Files series.

Chairman of the Oregon, Juan Cabrillo, is on a rescue mission when ahigh-profile Russian prisonerwarns of aweapon designed by one of America's greatest inventorsin this #1 New York Times bestselling series by the grand master of adventure.
In October 1943, a U.S. destroyer sailed out of Philadelphia and supposedly vanished, the result of a Navy experiment with electromagnetic radiation. The story was considered a hoax but now Juan Cabrillo and his Oregon colleagues aren t so sure.
There is talk of a new weapon soon to be auctioned, something very dangerous to America's interests, and the rumors link it to the great inventor Nikola Tesla, who wasworking with the Navy when he died in 1943. Was he responsible for the experiment? Are his notes in the hands of enemies? As Cabrillo races to find the truth, he discovers there is even more at stake than he could have imagined but by the time he realizes it, he may already be too late.

Clive Cussleris the author or coauthor of over fifty previous books in five bestselling series, including Dirk Pitt(r), NUMA(r) Files, Oregon(r)Files, Isaac Bell, and Sam and Remi Fargo. His nonfiction works includeBuilt for Adventure The Classic Automobiles of Clive Cussler and Dirk Pitt, andBuilt to Thrill: More Classic Automobiles from Clive Cussler and Dirk Pitt, plusThe Sea HuntersandThe Sea Hunters II; these describe the true adventures of the real NUMA, which, led by Cussler, searches for lost ships of historic significance. With his crew of volunteers, Cussler has discovered more than sixty ships, including the long-lost Confederate shipHunley.He lives in Colorado and Arizona. Jack Du Brul is the author of the Philip Mercer series, and the coauthor with Cussler of six Oregon Files novels. He lives in Vermont."

“Whenever any reader thinks about the ultimate action/adventure books, Clive Cussler is the name that appears in their minds. And this new offering in the Oregon Files series is another stunner that can claim to be one of the best action books of 2013 . . . The tale is full of action, death-defying escapes, heart-stopping scenes, and a cast of characters that you will not forget when the book has come to an end.”—Suspense Magazine

“Fans can depend on [the Oregon Files] to deliver action and adventure.”—Booklist

“Rousing . . . The conclusion is the usual Cussler nail-biter.”—Publishers Weekly

Praise for The Jungle

"With daring escapes, torturous imprisonment, heart-stopping action, and last-minute victories, THE JUNGLE is an action/adventure thriller reader's dream. The surprise ending will blow you away."—Library Journal

Praise for the Oregon Files