Map of Fates (CONSPIRACY OF US #2) (Hardcover) 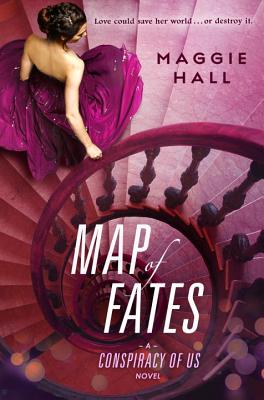 This is book number 2 in the CONSPIRACY OF US series.

That’s how long it took for Avery West’s ordinary life to change forever. In two weeks, she discovered she was heiress to a powerful secret society known as the Circle, learned her mother was taken hostage by the Circle’s enemies, and fell for a boy she's not allowed to love, just as she found out another was her unwelcome destiny.

Now Avery crosses oceans in private jets to hunt for clues that will uncover the truth about the Circle, setting her mom and herself free before it's too late. By her side are both the boys: Jack—steady, loyal, and determined to help her even at the expense of his own duty—and Stellan, whose connection to Avery grows stronger by the day, making her question what she believes at every turn.

But at the end of a desperate hunt from the islands of Greece to the red carpet at Cannes comes a discovery that not only changes everything, but could bring the whole world to its knees. And now Avery is forced to face the truth: In the world of the Circle, no one is what they seem.

Maggie Hall indulges her obsession with distant lands and far-flung adventures as often as she can. She has played with baby tigers in Thailand, learned to make homemade pasta in Italy, and taken thousands of miles of trains through the vibrant countryside of India. In her past life, she was a bookstore events coordinator and marketing manager, and when she's not on the other side of the world, she lives with her husband and their cats in Albuquerque, New Mexico, where she watches USC football, dabbles in graphic design, and blogs about young adult literature for YA Misfits.

"Map Of Fates is a fusion of familiar romance, fantasy, and adventure tropes."--VOYA

Praise for The Conspiracy of Us:

“An intense page turner filled with intrigue, lush settings and a dash of romance. This is a one-sitting read.”—Hypable.com

“This is such a fun, wild read. . . . I recommend this for anyone looking for adventure, spice, forbidden romance and very powerful families who rule behind the scenes. Oh, and conspiracies, lots and lots of conspiracies.”—USAToday.com

“A cinematic, puzzle-solving action-adventure that . . . will appeal to those who want puzzles and action mixed with their fashion and romance.”—Kirkus Reviews

“Hall’s worldbuilding is as enthralling as the best fantasy sagas, even though it is a world within our own. Her characters are captivating, again cleverly mixing believability with the outrageous demands of her conspiracy. The puzzle and mystery of her plot will draw readers in . . . This is a fun, fast read.” —VOYA

“This fine mix of adventure and romance will easily pull readers into a world of just-believable-enough conspiracy theories, while a cliff-hanger ending will leave them eagerly awaiting the next installment of the adventure.”—Booklist

“Thrilling and addictive, Hall’s debut is a knockout! . . . This is an outstanding novel by an impressive author to watch.”—RT Book Reviews

“Hall sweeps readers into a world of conspiracies, puzzles, and mystery from the first page, and provides a likable and intelligent narrator in Avery. Perfect for fans of Rick Riordan’s The Red Pyramid, Ally Carter’s Gallagher Girls series, and Michael Scott’s The Secrets of the Immortal Nicholas Flamel.”—School Library Journal