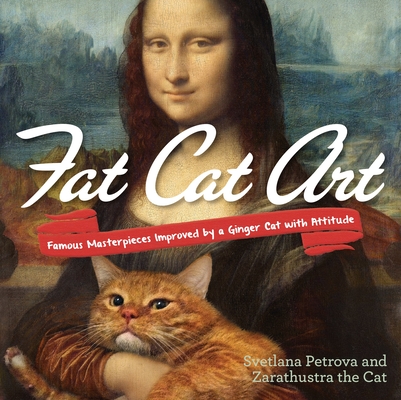 
Email or call for price.
“It’s official. That thing that classic art has been missing is a chubby reclining kitty.”
—The Huffington Post
Internet meme meets classical art in Svetlana Petrova’s brilliant Fat Cat Art. Featuring her twenty-two-pound, ginger-colored cat Zarathustra superimposed onto some of the greatest artworks of all time, Petrova’s paintings are an Internet sensation. Now fans will have the ultimate full-color collection of her work, including several never-before-seen pieces, to savor for themselves or to give as a gift to fellow cat lovers.

From competing with Venus’s sexy reclining pose (and almost knocking her off her chaise lounge in the process) in Titian’s Venus of Urbino, to exhibiting complete disdain as he skirts away from God’s pointing finger in Michelangelo’s Creation of Adam, Zarathustra single-handedly rewrites art history in the way that only an adorable fat cat can.
Svetlana Petrova is an artist, producer, and curator living in St. Petersburg, Russia. She is the founder and director of the International Festival of Animation Arts, "Multivision." In 2011, she created FatCatArt.com—an experiment to combine art history and the spirit of LOLcats. Her "famous paintings improved by cats" went viral and became an internet sensation. She adopted her feline coauthor and mews, Zarathustra, when her mother died. Loved and spoiled by Svetlana’s mother, this 8-year-old ginger tabby cat is 10 kilos of pure undisturbed joy, although he is trying to diet.
On Svetlana Petrova:

"Russian artist Svetlana Petrova has created a series of cat-infused classic art pieces. An ode to her own cat Zarathustra, Petrova's work is unlike any other series."
—Trend Hunter

"Now that's what we call a masterpuss."
—Oxford Mail

"A Russian artist has taken hundreds of classic paintings and Photoshoppped her pet cat Zarathustra into them, making them, in our opinion, 89426576 times better."
—Metro