I Was a Child: A Memoir (Paperback) 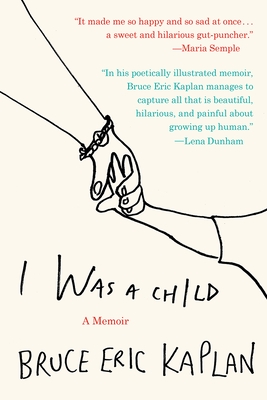 “If The Little Prince had crash-landed, instead of in the Sahara, into a middle-class Jewish home in Maplewood, N.J. in the late 1960s, it might feel something like I Was a Child.”—The Hollywood Reporter

Bruce Eric Kaplan, also known as BEK, is one of the most celebrated and admired cartoonists in America. I Was a Child is the story of his childhood in suburban New Jersey, detailing the small moments we all experience: going to school, playing with friends, family dinners, watching TV on a hot summer night, and so on. It would seem like a conventional childhood, although Kaplan's anecdotes are accompanied by his signature drawings of family outings and life at home-road trips, milk crates, hamsters, ashtrays, a toupee, a platypus, and much more. Kaplan's cartoons, although simple, are never straightforward; they encompass an easy irony and dark humor that often cuts straight to the truth of experience. Brilliantly relatable and genuinely moving, I Was a Child is about our attempts to understand the mysteries that are our parents, our families, and ourselves.

BRUCE ERIC KAPLAN, also known as BEK, is an American artist whose single-panel cartoons frequently appear in The New Yorker. He also has a whole other life as a television writer and producer, currently for HBO’s Girls.

“[Bruce Eric Kaplan’s] memoir begins: "I was a child, but I wasn't very good at it," and if you get what he means, then this is the book for you….in other words, and he renders his family's peculiarities so perfectly that they become universal….His recollections are never of anything extraordinary. They're deadpan, hilarious, and really quite moving.”
—The Philadelphia Inquirer

“[A] delightful memoir..[and] a funny and moving look at the figures that inspired Kaplan’s cartoon world.”
—The Wall Street Journal

“If The Little Prince had crash-landed, instead of in the Sahara, into a middle-class Jewish home in Maplewood, N.J. in the late 1960s, it might feel something like I Was a Child.”
—The Hollywood Reporter

“I Was a Child made me so happy and so sad at once. It is a sweet and hilarious gut-puncher. That a memoir rooted in rage and confusion could leave me aching with love, determined to forgive, and desperate for 70's TV is glorious alchemy indeed.”
—Maria Semple, author of Where’d You Go, Bernadette

“Bruce Eric Kaplan's beautiful memoir, I Was a Child, does what his deceptively simple drawings do: takes complicated feelings—here the baffling questions, the confinement, and the secret freedom of childhood—and makes them funny and unsettling and achingly sad. Anyone who was a child will love it.”
—Maile Meloy, author of The Apprentices and The Apothecary

“The world according to Bruce Eric Kaplan is funny, idiosyncratic, and heartbreaking. This memoir, with his divine drawings, is so evocative that, though his childhood was utterly unlike mine, it sent me careening down a memory lane of my own: my bedroom, the breakfast table, the front steps to my house, what my mother said, candy bars, favorite TV shows. Also it made me cry.”
—Delia Ephron, author of Sister Mother Husband Dog

“I read this book in a single sitting, laughing out loud and quoting lines to anyone who would listen. It captures the deep strangeness and melancholy of childhood with sneaky accuracy and unexpected emotion, as well as excellent cartoons.”
—Tom Perrotta, author of Election and Little Children

"In his poetically illustrated memoir, Bruce Eric Kaplan manages to capture all that is beautiful, hilarious and painful about growing up human. He will make you laugh with recognition, cry with nostalgia and longing, and somehow wish you were growing up bored in New Jersey."
—Lena Dunham

“Bruce Eric Kaplan's prose is a lot like his drawings: blunt, arresting and hilarious. I Was a Child is extremely entertaining and deeply upsetting, often simultaneously. I enjoyed every page and was sad when it was over.”
—Simon Rich, author of Ant Farm and The Last Girlfriend on Earth

“This is a wonderful, touching, and funny book.”
—Roz Chast, author of National Book Award finalist Can’t We Talk About Something More Pleasant?