Imagination According to Humphrey (Hardcover) 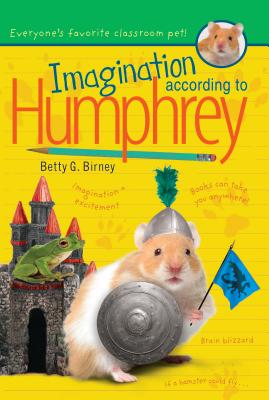 This is book number 11 in the Humphrey series.

Humphrey's eleventh adventure celebrates stories, writing, and the power of the imagination!

It’s pawsitively easy for Humphrey to picture exciting adventures with dragons and knights in the story Mrs. Brisbane is reading aloud. He has no trouble coming up with Plans to help his friends and tricks to entertain them. His imagination even goes a little too far when he wonders if Carlos’s imaginary friend might be a ghost.

If only his imagination wouldn’t disappear when he tries to write. Luckily, Humphrey likes a challenge, and Mrs. Brisbane has lots of writing tips that do the trick.

Betty G. Birney has written episodes for numerous children’s television shows, including The New Adventures of Madeleine, Doug, and Bobby’s World, as well as after-school specials and a television movie, Mary Christmas. She has won many awards for her television work, including an Emmy, three Humanitas Prizes, and a Writers Guild of America award, and won a Christopher Award for Friendship According to Humphrey.

In addition to the Humphrey books, she is the author of The Seven Wonders of Sassafras Springs and The Princess and the Peabodys.

A native of St. Louis, Missouri, Betty lives in Los Angeles with her husband, an actor.

"The theme of perseverance is prevalent throughout this pleasant early chapter book. It includes tips for budding writers and could spark a class discussion about inspiration."--School Library Journal

“Humphrey, a delightful, irresistible character, is big hearted, observant, and creative.” —Booklist on The World According to Humphrey

“Humphrey is a witty, fun, and lovable character with great kid appeal.” —School Library Journal on Surprises According to Humphrey

“This thoughtful yet upbeat tale lends credence to the notion that actions and intentions can be misinterpreted while pointing out the benefits of looking at a situation from another’s point of view. Readers will find that seeing the world from Humphrey’s standpoint is mighty satisfying.” —Kirkus Reviews on Friendship According to Humphrey

“Narrated in Humphrey’s lively voice, the story is characteristically amusing and incorporates kid-relevant issues, such as being the last chosen for sports teams and the importance of respect, support, kindness, and appreciation. New and returning readers will enjoy the caring hamster’s unique perspective on everything from friendship to fire drills.” —Booklist on Surprises According to Humphrey