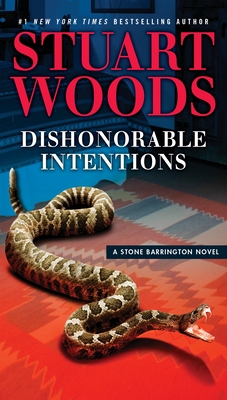 This is book number 38 in the A Stone Barrington Novel series.

Stone Barrington gains an adversary that he can’t seem to shake in this electrifying adventure in the #1 New York Times bestselling series.

Stone Barrington’s latest lady friend is full of surprises, both good and ill. A sensual woman with unexpected desires, Stone finds her revelations in the boudoir extremely agreeable. But on the other hand, she also has some unfinished business with a temperamental man who believes Stone is an intolerable obstacle in the way of his goals.

In a cat-and-mouse game that trails from sun-drenched Bel-Air to a peaceful European estate and gorgeous Santa Fe, Stone and his friend remain just one step ahead of their opponent. But their pursuer is not a man who can stand to be thwarted, and tensions are mounting...and may soon reach the boiling point.
Stuart Woods is the author of more than eighty-five novels, including the #1 New York Times-bestselling Stone Barrington series. He is a native of Georgia and began his writing career in the advertising industry. Chiefs, his debut in 1981, won the Edgar Award. An avid sailor and pilot, Woods lives in Florida, Maine, and Connecticut.
Praise for Stuart Woods