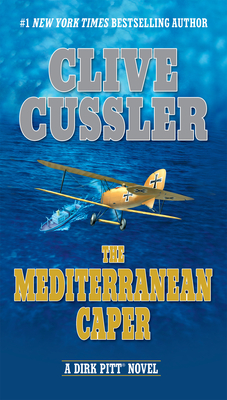 This is book number 1 in the Dirk Pitt Adventure series.

The adventure that started it all, introducing readers to Dirk Pitt, "oceanography’s answer to Indiana Jones" (Associated Press), and a #1 New York Times-bestselling series.

On a quiet Greek island, a U.S. air force base has come under attack—by a World War I fighter plane . . . a famous yellow Albatros supposedly lost at sea in 1918.

Now it is up to Dirk Pitt, Al Giordino, and the rest of the NUMA team to root out the elusive truth behind the incident—and find out how it’s connected to mysterious acts of sabotage against a scientific expedition, an international smuggling ring, and a dark-haired beauty with some dangerous secrets.  The search for answers will lead Pitt from a lavish island villa, to a moving freighter eerily empty of crew, to a massive underwater cavern housing the heart of a criminal operation that is larger and more elaborate than he ever could have imagined . . . a lucrative operation that its mastermind would kill to protect.

With its fearless and dashing hero, high-stakes action, and non-stop excitement, The Mediterranean Caper is classic Dirk Pitt . . . and classic Cussler.