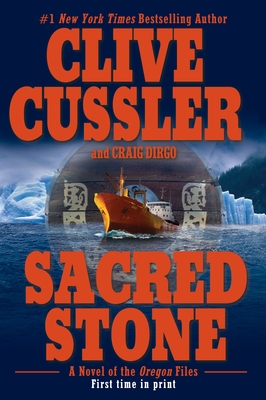 This is book number 2 in the The Oregon Files series.

Juan Cabrillo and his CIA-backed Oregon crew must beat opposing factions to a discovery that could prevent World War III in this novel in the #1 New York Times-bestselling series.

In the remote wastes of Greenland, a young scientist has unearthed an artifact hidden in a cave for a millennium: a 50,000 year-old radioactive meteorite known as the Sacred Stone. But the astounding find places him in the crosshairs of two opposing groups who seek the stone for themselves.

One is a group of Muslim extremists who have stolen a nuclear device. With the power of the meteorite, they could vaporize any city in the west. The other group is led by a megalomaniacal industrialist who seeks to carry out the utter annihilation of Islam itself.

Caught between two militant factions bent on wholesale slaughter, Juan Cabrillo and his crew must fight to protect the scientist and the Sacred Stone—and prevent the outbreak of World War III...

Craig Dirgo has been special projects manager on many NUMA expeditions since 1987 and now serves as a trustee. He is the coauthor of The Sea Hunters and The Sea Hunters II.