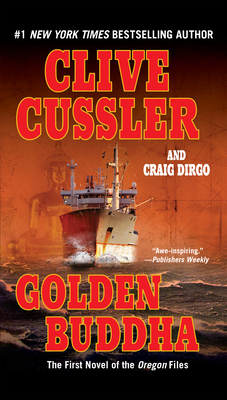 This is book number 1 in the The Oregon Files series.

In the first novel in the #1 New York Times bestselling Oregon Files series, Chairman Juan Cabrillo and his crew are hired by the US government to free Tibet from Chinese control...

The Corporation, a group of highly intelligent and skilled mercenaries, under the leadership of Juan Cabrillo, board a brand new ship. It's a state-of-the-art seagoing marvel with unthinkable technology at its disposal. And it's designed to look like a rusty old lumber hauler. But if Cabrillo and his team plan to make this spy ship their new headquarters, their first mission had better be a success.

With the secret backing of the US government, Cabrillo sets out to put Tibet back in the hands of the Dalai Lama by striking a deal with the Russians and the Chinese. His main negotiating chip is knowledge of a golden Buddha containing records of vast oil reserves in the disputed land. But first, he'll have to locate—and steal—the all-important artifact. And there are certain people who would do anything in their power to see him fail...

Craig Dirgo has been special projects manager on many NUMA expeditions since 1987 and now serves as a trustee. He is the coauthor of The Sea Hunters and The Sea Hunters II.

"Readers will burn up the pages following the blazing action and daring exploits of these men and women and their amazing machines."
—Publishers Weekly

"Fans of Cussler will not be disappointed."
—Library Journal