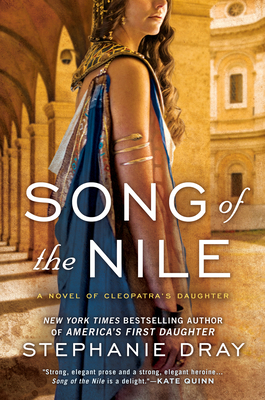 Having survived her perilous childhood as a royal captive of Rome, Selene has pledged her loyalty to Emperor Augustus, swearing to become his very own Cleopatra. But even though she is forced to marry a man of the emperor’s choosing, Selene will not allow her new husband to rule in her name. Quickly establishing herself as a capable leader, she wins the love of her new subjects and makes herself vital to Rome by bringing forth bountiful harvests with the magic of Isis flowing through her veins.

As she rules the kingdom of Mauretania and contends with imperial politics and religious persecution, Selene beguiles her way to the precipice of power with the ultimate goal of taking back her birthright. But the price of winning back her mother’s Egyptian throne may be more than she’s willing to pay...

Stephanie Dray is a New York Times, Wall Street Journal, and USA Today bestselling author of historical women’s fiction. Her award-winning novels include America's First Daughter and My Dear Hamilton, co-authored with Laura Kamoie, and the Cleopatra’s Daughter Trilogy. Her work has been translated into eight languages and often tops lists for the most-anticipated reads of the year. Before she became a novelist, she was a lawyer and a teacher. Now she lives near the nation's capital with her husband, cats, and history books.

Praise for Song of the Nile

“Strong, elegant prose and a strong, elegant heroine...Song of the Nile is a delight!”—New York Times bestselling author Kate Quinn

“A magnificent novel with a magical twist!”—Fresh Fiction

“Delicious prose, an exotic setting, and a heroine that will impress you with her unfailing courage and determination to reclaim what was once hers…historical women’s fiction at its finest.”—History and Women

“With clear prose, careful research, vivid detail, and a dash of magic, Stephanie Dray brings true life to one of Egypt’s most intriguing women.”—Susan Fraser King

“A stirring story of a proud, beautiful, intelligent woman whom a 21st century reader can empathize with.”—RT Book Reviews