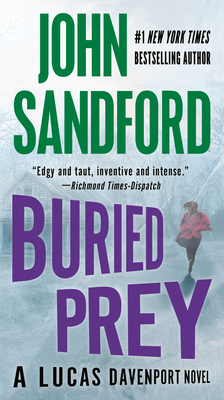 This is book number 21 in the A Prey Novel series.

For twenty-five years the unsolved kidnapping of two young girls has haunted Minneapolis homicide detective Lucas Davenport. Today, the bodies have been found. Today, he returns to a crime—and a nightmare—darker than any before...

A block on the edge of the Minneapolis loop is being razed when a macabre discovery is made: two girls buried under a rotted old house. Lucas Davenport knows how long they’ve been there. In 1985, he was part of the manhunt to track down two kidnapped sisters. They were never found—until today. With the bodies discovered, Davenport has the chance to return to the crime that has haunted him for years. The deeper he probes, the more one thing becomes clear: It wasn't just the bodies that were buried. It was the truth.
John Sandford is the pseudonym for the Pulitzer Prize-winning journalist John Camp. He is the author of the Prey novels, the Kidd novels, the Virgil Flowers novels, and six other books, including three YA novels co-authored with his wife Michele Cook.
Praise for John Sandford’s Prey Novels