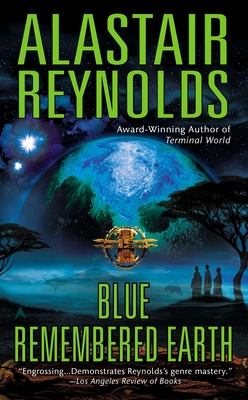 The first novel in the Poseidon's Children series from the acclaimed author of the Revelation Space series.

One hundred and fifty years from now, Africa has become the world’s dominant technological and economic power. Crime, war, disease and poverty have been practically eliminated. The Moon and Mars are settled, and colonies stretch all the way out to the edge of the solar system. And Ocular, the largest scientific instrument in history, is about to make an epochal discovery...

Geoffrey Akinya wants only one thing: to be left in peace, so that he can continue his long-running studies into the elephants of the Amboseli basin. But Geoffrey’s family, which controls the vast Akinya business empire, has other plans for him. After the death of his grandmother Eunice—the erstwhile space explorer and entrepreneur—something awkward has come to light on the Moon, so Geoffrey is dispatched there to ensure the family name remains untarnished.

But the secrets Eunice died with are about to be revealed—secrets that could change everything...or tear this near utopia apart.

Alastair Reynolds is the author of the Poseidon’s Children series and the Revelation Space series. Born in Barry, South Wales, he studied at Newcastle University and the University of St. Andrews. A former astrophysicist for the European Space Agency, he now writes full-time.

“Engrossing...Blue Remembered Earth is, ultimately, a collection of conflicting ‘isms’: individualism, collectivism, romanticism, capitalism, expansionism, escapism. The ability to integrate such competing notions into a stable narrative speaks to the ideological power of the best SF; it also demonstrates Reynolds’s genre mastery....More importantly, the projected series—and the work Reynolds has yet to produce—will tell us much about the state of SF in the early twenty-first century.”—Los Angeles Review of Books

“Reynolds both develops a richly detailed portrait of a resurgent, postapocalyptic Earth society and economy, and leaves himself plenty of room to expand his narrative space exponentially.”—Locus

“As my number one SF writer of the ’00s, any novel or story by Alastair Reynolds is a must...A compulsive read that you do not want to put down...If you want to understand why SF at its best is still the most interesting form of literature today, Blue Remembered Earth [is the place] to go.”—Fantasy Book Critic

“Reynolds’s near-future is so brilliantly extrapolated, with original ideas fizzing off every page, that the reader is left awestruck at what further wonders await in the following volumes. Excellent.”—The Guardian (UK)

“A richly detailed portrait of a resurgent, postapocalyptic Earth society and economy.”—Locus

“Reynolds does what he does best in this tale of a not-unimaginably distant future: a sweeping family epic. With space travel.”—Booklist