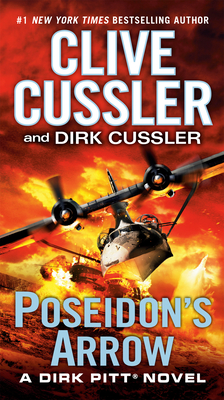 This is book number 22 in the Dirk Pitt Adventure series.

In this adventure in the #1 New York Times bestselling series, oceanographer Dirk Pitt is back to find a crucial piece of marine tech that could reshape the United States’ defense program...

It is the greatest advance in American defense technology in decades—an attack submarine capable of incredible underwater speeds. There is only one problem: A key element of the prototype is missing—and the man who developed it is dead.

At the same time, ships have started vanishing mid-ocean, and when a few reappear, bodies are found aboard burned to a crisp. Could these mysterious events be connected to an Italian submarine that itself disappeared in 1943?

It is up to NUMA director Dirk Pitt and his team, aided by a beautiful NCIS agent and by Pitt’s children, marine engineer Dirk and oceanographer Summer, to go on a desperate international chase to find the truth, from Washington to Mexico, Idaho to Panama. What they discover at the end of it is a much, much greater threat than even they imagined.

Filled with breathtaking suspense and extraordinary imagination, Poseidon’s Arrow is further proof that when it comes to adventure writing, nobody beats Clive Cussler.


Dirk Cussler is the coauthor with Clive Cussler of six Dirk Pitt adventures, most recently Odessa Sea. For the past several years, he has been an active participant and partner in his father’s NUMA expeditions and has served as president of the NUMA advisory board of trustees. He lives in Arizona.

“Just about the best storyteller in the business.”—New York Post

“Cussler is a master at building suspense and tension.”—Richmond Times-Dispatch

“A new Clive Cussler novel is like a visit from your best friend.”—Tom Clancy

“When the going gets tough, I read Clive Cussler, for no one can spin a yarn that’s so thoroughly spellbinding and entertaining as he can.”—Harold Coyle