The Mayan Secrets (A Sam and Remi Fargo Adventure #5) (Paperback) 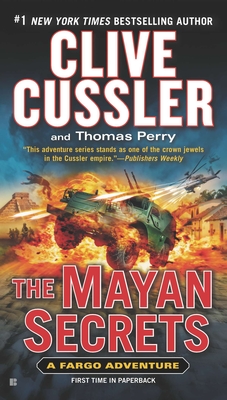 By Clive Cussler, Thomas Perry
$9.99
Email or call for price.

This is book number 5 in the A Sam and Remi Fargo Adventure series.

Treasure-hunting team Sam and Remi Fargo must protect a book that could help locate lost Mayan cities in this adventure in the #1 New York Times bestselling series.

Husband-and-wife team Sam and Remi Fargo are in Mexico, packing medical supplies in the wake of an earthquake, when they come upon a remarkable discovery—the mummified remains of a man clutching an ancient sealed pot. Within the pot is a Mayan book, a codex larger than any known before.

The book contains astonishing information about the Mayans, their cities, and about mankind itself. The secrets are so powerful that some people would do anything to possess them—as the Fargos are about to find out. Many men and women are going to die for that book.

CLIVE CUSSLER is the author of more than fifty previous books in five bestselling series, including Dirk Pitt®, NUMA® Files, Oregon® Files, Isaac Bell, and Fargo. His most recent New York Times bestselling novels are The Mayan Secrets, Zero Hour, and Mirage. His nonfiction works include Built for Adventure: The Classic Automobiles of Clive Cussler and Dirk Pitt, plus The Sea Hunters, and The Sea Hunters II; the latter two describe the true adventures of the real NUMA®, which, led by Cussler, searches for lost ships of historic significance. With his crew of volunteers, Cussler has discovered more than sixty ships, including the long-lost Confederate submarine Hunley. He lives in Colorado.

Thomas Perry is the highly acclaimed author of more than twenty novels, including the Edgar Award®–winning The Butcher’s Boy and the seven novels in the popular Jane Whitefield series, most recently Poison Flower. He has also been a writer and/or producer for several television series, including Simon & Simon, 21 Jump Street, and Star Trek: The Next Generation. He lives in Southern California.