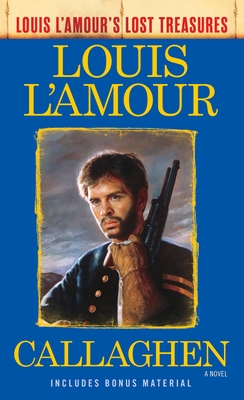 Callaghen’s business is soldiering. For twenty years he’d fought all over the world, from China to the deserts of California; now he’s a private in the U.S. Cavalry, poorly paid, his enlistment about to run out. He’s ready to move on . . . until he comes across a startling discovery: a treasure map belonging to a dead lieutenant who may not have been all that he seemed. The map points the way to an underground river of gold . . . or does it? To find out, Callaghen will have to fight the toughest war of his life: against a fierce Indian warrior, a vindictive commanding officer, and a ruthless gang of outlaws who’ll turn what may be a river of gold into a river of blood.

Louis L’Amour’s Lost Treasures is a project created to release some of the author’s more unconventional manuscripts from the family archives.

In Louis L’Amour’s Lost Treasures: Volumes 1, Beau L’Amour takes the reader on a guided tour through many of the finished and unfinished short stories, novels, and treatments that his father was never able to publish during his lifetime. L’Amour’s never-before-seen first novel, No Traveller Returns, faithfully completed for this program, is a voyage into danger and violence on the high seas. These exciting publications will be followed by Louis L’Amour’s Lost Treasures: Volume 2.

Additionally, many beloved classics will be rereleased with an exclusive Lost Treasures postscript featuring previously unpublished material, including outlines, plot notes, and alternate drafts. These postscripts tell the story behind the stories that millions of readers have come to know and cherish.

Our foremost storyteller of the American West, Louis L’Amour has thrilled a nation by chronicling the adventures of the brave men and woman who settled the frontier. There are more than three hundred million copies of his books in print around the world.