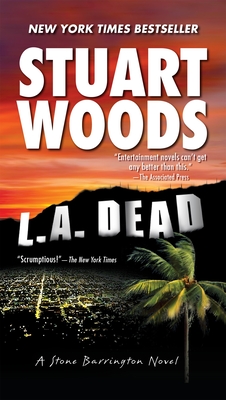 This is book number 6 in the A Stone Barrington Novel series.

Stone’s trip to Venice with a fiery Mafia princess is cut short by a frantic phone call from halfway around the world. A celebrity murder has Los Angeles in an uproar—and a former flame pining for Stone’s help in more ways than one. When he lands amid Hollywood’s sun and sin, Stone must plumb the depths of film society to find the killer, before a court trial rips away his last chance at a life he once desperately wanted...
Stuart Woods is the author of more than eighty-five novels, including the #1 New York Times-bestselling Stone Barrington series. He is a native of Georgia and began his writing career in the advertising industry. Chiefs, his debut in 1981, won the Edgar Award. An avid sailor and pilot, Woods lives in Florida, Maine, and Connecticut.
Praise for L.A. Dead

“Entertainment novels can’t get any better than this.”—Associated Press