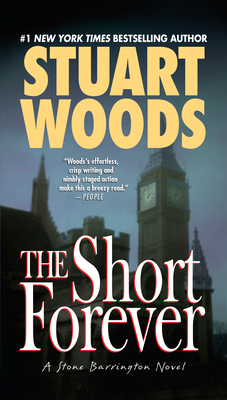 This is book number 8 in the A Stone Barrington Novel series.

Stone Barrington gets caught up in a matter of international intrigue in this explosive thriller in the #1 New York Times bestselling series.

In London to locate the niece of his enigmatic client, Stone Barrington soon finds himself out of his territory and out of his depth. Baffled as he is by the behavior of his quarry, Stone’s life is further complicated by two—possibly three—murders and the affectionate attentions of two former lovers. And when the intelligence services of three countries become involved, he can only hang on for the wild ride...
Stuart Woods is the author of more than eighty-five novels, including the #1 New York Times-bestselling Stone Barrington series. He is a native of Georgia and began his writing career in the advertising industry. Chiefs, his debut in 1981, won the Edgar Award. An avid sailor and pilot, Woods lives in Florida, Maine, and Connecticut.
Praise for The Short Forever

“A tight mystery right up to the end...good-guy charm.”—The Palm Beach Post

“[A] speedy tale...Bombshell revelations and multiple resolutions combine with the cinematic plot for a perfect flight or beach read.”—Publishers Weekly