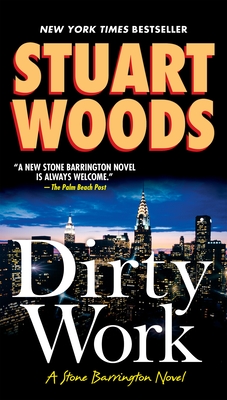 This is book number 9 in the A Stone Barrington Novel series.

Stone Barrington gets a taste of New York City’s devious upper crust in this “sleek and engaging”* mystery in the #1 New York Times bestselling series.

Hired to prove infidelity in an heiress’s marriage, Stone Barrington goes undercover. But the work turns dirty—and catastrophic—when the errant husband is found dead and the other woman disappears without a trace. Now, Stone must clear his own good name and find a killer hiding among the glitterati of New York’s high society.
Stuart Woods is the author of more than eighty-five novels, including the #1 New York Times-bestselling Stone Barrington series. He is a native of Georgia and began his writing career in the advertising industry. Chiefs, his debut in 1981, won the Edgar Award. An avid sailor and pilot, Woods lives in Florida, Maine, and Connecticut.
Praise for Dirty Work

“Woods writes in a dry, witty style that keeps all his characters on a likable keel.”—*Publishers Weekly

“A crisp, fleet timekiller: the fashionplate lawyer’s best outing since Dead in the Water.”—Kirkus Reviews