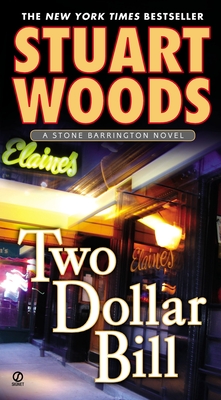 This is book number 11 in the A Stone Barrington Novel series.

In this thriller in the #1 New York Times bestselling series, Manhattan cop-turned-lawyer Stone Barrington is back on his home turf caught between a filthy rich conman and a beautiful prosecutor...

Not long after Stone and his ex-partner Dino make the acquaintance of Billy Bob—a smooth-talkin’ Texan packing a wad of rare two-dollar bills—someone takes a shot at them. Against his better judgment, Stone offers Billy Bob a safe haven for the night but almost immediately regrets it. The slippery out-of-towner has gone missing and someone has been found dead—in Stone’s town house no less. Now, Stone is now stuck between a stunning federal prosecutor and a love from his past, a con man with more aliases than hairs on his head, and a murder investigation that could ruin them all.
Stuart Woods is the author of more than eighty-five novels, including the #1 New York Times-bestselling Stone Barrington series. He is a native of Georgia and began his writing career in the advertising industry. Chiefs, his debut in 1981, won the Edgar Award. An avid sailor and pilot, Woods lives in Florida, Maine, and Connecticut.
Praise for Two Dollar Bill