Biggest Brother: The Life Of Major Dick Winters, The Man Who Led The Band of Brothers (Paperback) 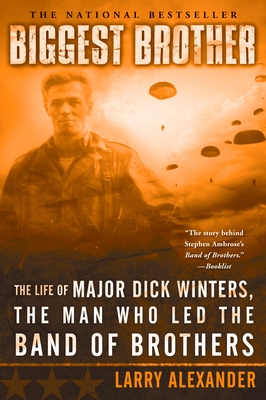 Biggest Brother: The Life Of Major Dick Winters, The Man Who Led The Band of Brothers (Paperback)


Email or call for price.
The New York Times bestseller that tells the true story of the life of Major Dick Winters, the man who led the Band of Brothers in World War II.

In every band of brothers, there is always one who looks out for the others.

They were Easy Company, 101st Army Airborne—the World War II fighting unit legendary for their bravery against nearly insurmountable odds and their loyalty to one another in the face of death. Every soldier in this band of brothers looked to one man for leadership, devotion to duty, and the embodiment of courage: Major Dick Winters.

This is the riveting story of an ordinary man who became an extraordinary hero. After he enlisted in the army’s arduous new Airborne division, Winters’s natural combat leadership helped him rise through the ranks, but he was never far from his men. Decades later, Stephen E. Ambrose’s Band of Brothers made him famous around the world.

Full of never-before-published photographs, interviews, and Winters’s candid insights, Biggest Brother is the fascinating, inspirational story of a man who became a soldier, a leader, and a living testament to the valor of the human spirit—and of America.
Larry Alexander is the author of the New York Times bestselling Biggest Brother: The Life Of Major Dick Winters, The Man Who Led The Band of Brothers and Shadows in the Jungle: The Alamo Scouts Behind Japanese Lines in World War II, as well as the coauthor of A Higher Call: An Incredible True Story of Combat and Chivalry in the War-Torn Skies of World War II. He has been a journalist and columnist for the Intelligencer Journal newspaper in Lancaster, Pennsylvania, for more than a decade, winning numerous awards for excellence in journalism.
Praise for Biggest Brother

“Excellent....Anyone who has read Band of Brothers will want to read this.”—ARMY Magazine

“[A] straightforward study of the best sort of small-unit leader.”—Publishers Weekly

“The story behind Stephen Ambrose’s Band of Brothers.”—Booklist