Sog: The Secret Wars of America's Commandos in Vietnam (Paperback) 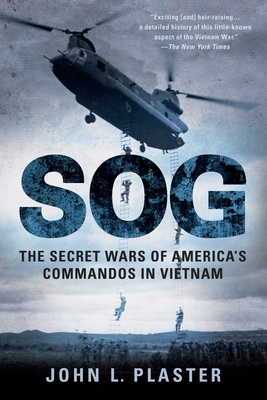 “The most comprehensive examination of widespread covert American actions during the Vietnam War.”—Kirkus Reviews

Code-named the Studies and Observations Group, SOG was the most secret elite U.S. military unit to serve in the Vietnam War—so secret its very existence was denied by the government. Composed entirely of volunteers from such ace fighting units as the Army Green Berets, Air Force Air Commandos, and Navy SEALs, SOG took on the most dangerous covert assignments, in the deadliest and most forbidding theaters of operation.

Major John L. Plaster, three-tour SOG veteran, shares the gripping exploits of these true American warriors. Here is a minute-by-minute, heartbeat-by-heartbeat account of SOG’s stunning operations behind enemy lines—penetrating heavily defended North Vietnamese military facilities, holding off mass enemy attacks, launching daring missions to rescue downed U.S. pilots. From sabotage to espionage to hand-to-hand combat, these are some of the most extraordinary true stories of honor and heroism in the history of the U.S. military.

Major John L. Plaster is a national authority on sniping, firearms, and special operations, as well as the author of Secret Commandos: Behind Enemy Lines With the Elite Warriors of SOG and SOG: The Secret Wars of America’s Commandos in Vietnam. He served three tours in the top-secret unconventional warfare group, Studies and Observations Group, in Vietnam. As a long-range reconnaissance leader, he led tiny intelligence-gathering teams behind enemy lines in Laos and Cambodia before leaving SOG in late 1971. He was decorated for heroism four times and retired from the U.S. Army as a major.

“Exciting [and] hair-raising...a detailed history of this little-known aspect of the Vietnam War.”—The New York Times

“A magnificent book of enormous power and a milestone in the literature of special operations.”—Col. Robert Howard, Medal of Honor winner, the Vietnam War’s most highly decorated soldier