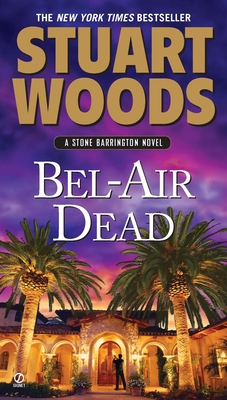 This is book number 20 in the A Stone Barrington Novel series.

Stone Barrington discovers that all the botox in Bel-Air can’t keep its biggest power players from cracking under pressure in this New York Times bestseller.

Stone is no stranger to Bel-Air—and to the beautiful and wealthy widow who needs his help to become even wealthier. At stake is the sale of her investment in Hollywood's world-famous Centurion Studios. But when Stone arrives in Bel-Air to finalize the sale, he discovers that one of L.A.'s most rapacious power brokers has Centurion in his sights. Now, Stone must play a surprisingly complex and high-stakes game, the kind only the truly rich and dangerously ambitious can win—and survive.
Stuart Woods is the author of more than eighty-five novels, including the #1 New York Times-bestselling Stone Barrington series. He is a native of Georgia and began his writing career in the advertising industry. Chiefs, his debut in 1981, won the Edgar Award. An avid sailor and pilot, Woods lives in Florida, Maine, and Connecticut.
Praise for Bel-Air Dead

“A fast-paced mystery with an inside look into Hollywood and the motion picture business.”—The Oklahoman

“Fans will enjoy the Stone invasion of Hollywood...The story line is fast-paced from the moment Stone arrives in California.”—Midwest Book Review

“Woods’ many fans will enjoy seeing the characters from his various novels interacting, and the story moves along at an exciting clip.”—Booklist