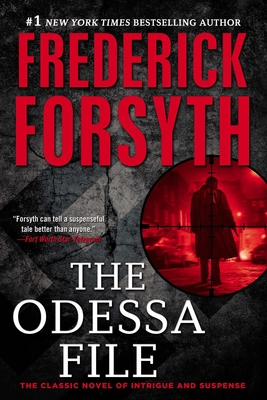 The  suicide of an elderly German Jew explodes into  revelation after revelation: of a Mafia-like  organization called Odessa ...of a real-life fugitive known as the  "Butcher of Riga"..of a young German journalist  tumed obsessed avenger.......and, ultimately, of brilliant, ruthless plot  to reestablish the worldwide power of SS mass  murderers and to carry out Hitler's chilling  "Final Solution."

Frederick Forsyth is the #1 New York Times bestselling author of seventeen novels, including The Day of the Jackal and The Odessa File, as well as short story collections and a memoir. A former Air Force pilot, and one-time print and television reporter for the BBC, he has had four movies and two television miniseries made from his works. He is the winner of three Edgar Awards, and in 2012 he won the Diamond Dagger Award from the Crime Writers' Association, a lifetime achievement award for sustained excellence. He lives in Hertfordshire, England.

“Forsyth can tell a suspenseful tale better than anyone.”—Fort Worth Star-Telegram

“When it comes to espionage, international intrigue, and suspense, Frederick Forsyth is a master.” —The Washington Post Book World

“A thrilling cat-and-mouse game…Forsyth skillfully blends fact and fiction into a suspenseful and detailed story which is often downright chilling in its credibility.”—Library Journal

“Suspense taut as a violin string…Will keep you reading into the wee hours of the morning.”—The New York Times

“Framed by the unshakable facts of two decades, filled with an exceptional cast of characters—both real and fictional, The Odessa File is a story of superior swift suspense…An unmatchable reading experience.”—The Literary Guild Magazine