Abandoned in Hell: The Fight For Vietnam's Firebase Kate (Paperback) 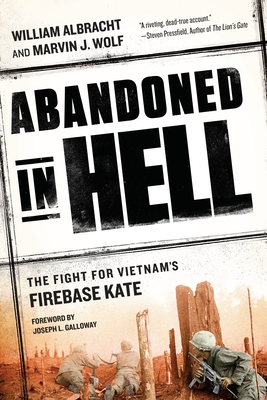 Abandoned in Hell: The Fight For Vietnam's Firebase Kate (Paperback)

“A riveting, dead-true account in the tradition of Black Hawk Down and We Were Soldiers Once...and Young.”—Steven Pressfield, national bestselling author of The Lion’s Gate

Outnumbered three dozen to one, Albracht’s men held off the assault but, after five days, Kate’s defenders were out of ammo and water. Refusing to die or surrender, Albracht led his troops off the hill and on a daring night march through enemy lines.

Abandoned in Hell is an astonishing memoir of leadership, sacrifice, and brutal violence, a riveting journey into Vietnam’s heart of darkness, and a compelling reminder of the transformational power of individual heroism. Not since Lone Survivor and We Were Soldiers Once...and Young has there been such a gripping and authentic account of battlefield courage.

Marvin J. Wolf is a decorated Vietnam veteran and the author or coauthor of many nonfiction books, including Where White Men Fear to Tread and Buddha’s Child.

“A riveting, dead-true account in the tradition of Black Hawk Down and We Were Soldiers Once...and Young.”—Steven Pressfield, national bestselling author of The Lion’s Gate

“Abandoned in Hell is essential reading about the brave men who lived and died fighting an unpopular war.”—David Hume Kennerly, winner of the 1972 Pulitzer Prize for Feature Photography

“Wolf and Albracht have interwoven the history, the tumult of battle and the spectrum of personalities that turn up on a forlorn red dirt hill on the Cambodian border in the crunch year of 1968. Firebase Kate becomes a microcosm of the turn of events, the disasters that were the death knell of the Vietnam war. It’s a story that grabs you by the throat and won’t let go.”—Tim Page, Photojournalist and author of Another Vietnam

“An epic tale of junior officers and NCOs salvaging a clusterf**k with minimum losses and maximum damage to the enemy. Nasty war. Great book.”—Jim Morris, author of War Storyand Above and Beyond

“This gripping, gritty and cinematic blow-by-blow account of outnumbered Americans locked in a desperate battle with the North Vietnamese Army is destined to become a classic of its genre. If you read only one book about Vietnam this year, this must be the one.”—Major General Paul Vallely, US Army (Ret.), Two-tour Vietnam Veteran, Fox News Senior Military Analyst, and author of Endgame: The Blueprint for Victory in the War on Terror

“This extraordinary narrative about leadership, loyalty and trust grabbed me from page one. It should be required reading for anyone who wants to know what really happened in Vietnam.”—Rocky Bleier, Decorated Vietnam Veteran and Four-Time Super Bowl Champion

“A riveting look at a little-known but compelling Vietnam War story.”—Publishers Weekly

“Albracht and Wolf present a vivid, often gripping account of the attack by 4,000 members of the People's Army of Vietnam...This fast-paced narrative encapsulates Vietnam War themes, significantly the bravery of grunts and company grade officers and their loyalty to one another.”—Library Journal