Murder, She Wrote: The Ghost and Mrs. Fletcher (Hardcover) 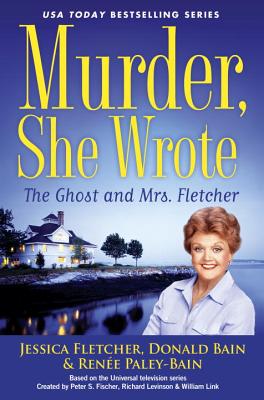 This is book number 44 in the Murder She Wrote series.

In the USA Today bestselling Murder, She Wrote series--make room for Jessica Fletcher as she cleans house to catch a killer who hasn't got a ghost of a chance.

Jessica's friend, Eve Simpson is the town's premier real estate agent and has recently taken on the task of selling one of Cabot Cove's oldest properties--the Spencer Percy House, built in 1805 by a sea captain for his young wife. Its current occupant, Cliff Cooper, a crusty former carpenter, is convinced he's about to die and wants the house sold so he can give the proceeds to his grandson, who spent much of his youth there.
But Eve's got quite a challenge on her hands. Not only is the building in deplorable physical condition, it is also rumored to be haunted.
When Cliff's deadly premonition becomes a reality, Dr. Seth Hazlitt is not so sure the man died of natural causes. As Jessica tries to get to the bottom of Cliff Cooper's death, a medium hired by Eve attempts to rid the house of the alleged apparition. But if Jessica isn't careful, she may be the one who joins the ranks of the dearly departed.

Jessica Fletcher is a bestselling mystery writer who has a knack for stumbling upon real-life mysteries in her various travels. Donald Bain, the author of more than 120 books, collaborates, with Renee Paley-Bain on this best-selling series. .