Arsenal of Democracy: The Politics of National Security--From World War II to the War on Terrorism (Hardcover) 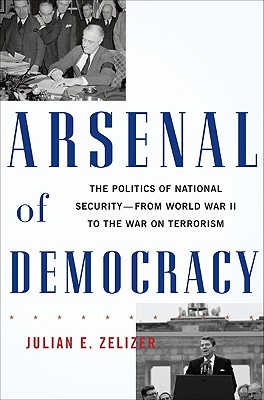 By a prize-winning historian, a sweeping history of the interplay between domestic politics and foreign policy since World War II

Julian E. Zelizer is a Professor of History and Public Affairs at Princeton University. He is the author of On Capitol Hill and Taxing America, winner of the Organization of American Historians' Ellis Hawley Prize, as well as several edited books. He has contributed articles to The New York Times, The Los Angeles Times, The Washington Post, CNN.com, The Daily Beast, Newsweek, and Politico. He lives in Princeton, New Jersey.

Bruce J. Schulman, William E. Huntington Professor of History, Boston University
“Extensively researched and vigorously argued, Arsenal of Democracy uncovers the intimate and complex interactions between domestic politics and national security policy in the post-World War II period, exploding the old saw that politics stopped at the water’s edge. Ranging over half a century, this ambitious book sets the standard for understanding the politics of national security policy in modern America.”

Laura Kalman, Professor of History, University of California, Santa Barbara
“Arsenal of Democracy provides a provocative, timely and compulsively readable account of the vexed relationship between foreign and domestic policy and the tangled politics of national security since World War II.”

Jeremi Suri, E. Gordon Fox Professor of History, University of Wisconsin
"Many Americans imagine a past era of bipartisan cooperation in our country around critical issues of war and peace. Zelizer shows that such a golden age never existed in our nation's politics. Instead, Democrats and Republicans have used foreign policy debates since World War II to push their partisan agendas and their electoral interests. Zelizer does not criticize this process, but he reminds us that successful foreign policy always requires effective manipulation of interests, fears, and aspirations at home. Zelizer offers a compelling account of how foreign policy is really made. Every citizen interested in understanding our nation's policies would benefit from reading this well-written book."

Kirkus
“A timely analysis of the forces that will collide as President Obama ponders the way forward in Afghanistan.”

Evan Thomas, author of Sea of Thunder and John Paul Jones
“Julian Zelizer is a patient and clear-eyed guide through the thicket of American foreign policy. He combines a feel for the sweep of history with a grasp of significant detail to bring alive America's often uncertain effort to lead the world.”

Michael Kazin, author of A Godly Hero: The Life of William Jennings Bryanand Professor of History, Georgetown University
“Julian Zelizer’s comprehensive, unfailingly wise book should finally demolish the myth of bipartisanship in the making of America's wars and diplomacy. Vigorously argued and brilliantly researched, Arsenal of Democracy is essential reading for anyone who wants to understand political conflict in the nation from FDR to Barack Obama.”

Frederik Logevall, Professor of History, Cornell University, and co-author of America’s Cold War: The Politics of Insecurity
“Arsenal of Democracy is a myth-shattering history of the American national security state since 1945. Zelizer sheds important new light on the fiercely debated issues of the postwar era, and amply supports his core argument: in the United States, foreign policy is always a political matter. A marvelously instructive work.”

Rick Perlstein, author of Nixonland
"Simultaneously a lucid synthesis and a work of commanding original research, Julian Zelizer's sweeping tour de horizon on American foreign policy from the age of isolationism to the post-9/11 era demonstrates to a fare-thee-well that politics has never, ever stopped at the water's edge. In making the argument, it is mature, fluent, and authoritative."

Randall B. Woods, author of LBJ: Architect of American Ambition
"Whether you are looking for a historical context in which to evaluate the wars in Iraq or Afghanistan or simply for a riveting, up-to-date history of U.S. national security policy, this is the book for you."

Sean Wilentz, author of The Age of Reagan
“Arsenal of Democracy is a magnificent book by one of the finest American historians to come along in some time. Julian Zelizer's acuity about how American politics actually works, on many fronts, illuminates his sweeping narrative and reinterpretation of national security policy, from FDR through the age of Ronald Reagan. Exact in detail but grand in conception, it is a work of modern historical analysis at its best.”

Booklist
“[A] detailed and even-handed account. Covering election campaigns, election winners’ interpretation of the results, and votes on Capitol Hill, Zelizer makes the case to general-interest readers that American politics have never stopped at the water’s edge.”
Foreign Affairs
“In this eminently readable book, Zelizer has provided an admirably balanced account of the politics of U.S. foreign policy…. It gives structural realists much to chew on; Zelizer makes a powerful case that domestic political debates, rather than the international environment, have frequently shaped U.S. foreign policy on issues of great strategic importance…. [A] powerful and rewarding study of U.S. foreign policy in modern times.”

Wilson Quarterly
“Attuned to the debates of the moment, political observers rarely step back to view the antecedents of current controversy.… Yet a wide lens is crucial when dealing with interconnected issues such as foreign policy. In Arsenal of Democracy, Julian E. Zelizer affords us an opportunity to scan that far horizon, surveying the history of the politics of national security from the late 19th century onward.”
The American Prospect
“Zelizer’s inspired choice to write a foreign-policy history primarily from the perspective of bare-knuckled politicking rather than high-minded disputes about America’s role in the world casts many events in a new light.”
Austin American-Statesman
“Zelizer offers a wealth of information on the history of U.S. foreign policy from 1940 through 2008, whether it’s the Truman administration and the origins of the Cold War, President Kennedy and the Cuban missile crisis, Nixon’s and Kissinger’s opening of U.S.-China relations, or the Carter administration’s response to the Soviet invasion of Afghanistan. With these and the many other events of U.S. foreign policy history, Zelizer sheds new light on the messiness of national security policy.”
Claremont Review of Books
“[Arsenal of Democracy] is a compelling and enlightening read. From the time of FDR into our own day, Zelizer provides vital context for understanding both the actions and the motives of American decision-makers.” The Journal of American History
“Julian E. Zelizer’s comprehensive study of American national security since the rise of the United States as a global superpower greatly expands scholarly understanding of recurring challenges in defining and protecting U.S. interests. Clear organization, meticulous research, and engaging analysis make this text essential reading in American diplomatic history and international politics.”