Six Easy Pieces: Essentials of Physics Explained by Its Most Brilliant Teacher (Paperback) 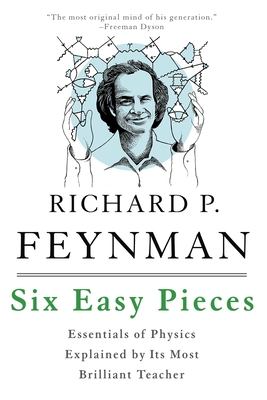 Learn how to think like a physicist from a Nobel laureate and "one of the greatest minds of the twentieth century" (New York Review of Books) with these six classic and beloved lessons
It was Richard Feynman's outrageous and scintillating method of teaching that earned him legendary status among students and professors of physics. From 1961 to 1963, Feynman delivered a series of lectures at the California Institute of Technology that revolutionized the teaching of physics around the world. Six Easy Pieces, taken from these famous Lectures on Physics, represent the most accessible material from the series. In these classic lessons, Feynman introduces the general reader to the following topics: atoms, basic physics, energy, gravitation, quantum mechanics, and the relationship of physics to other topics. With his dazzling and inimitable wit, Feynman presents each discussion with a minimum of jargon. Filled with wonderful examples and clever illustrations, Six Easy Pieces is the ideal introduction to the fundamentals of physics by one of the most admired and accessible physicists of modern times. "If one book was all that could be passed on to the next generation of scientists it would undoubtedly have to be Six Easy Pieces."- John Gribbin, New Scientist

Richard P. Feynman (1918-1988) was the Richard Chace Tolman Professor of Theoretical Physics at the California Institute of Technology. He was awarded the 1965 Nobel Prize for his work on the development of quantum field theory. He was also one of the most famous and beloved figures of the twentieth century, both in physics and in the public arena.

"The essence of physics and Feynman. No jargon, just ideas, excitement, and the straight dope. And real answers, like 'we don't know.'"—Stephen Wolfram

"The most original mind of his generation."—Freeman Dyson

"If one book was all that could be passed on to the next generation of scientists it would undoubtedly have to be Six Easy Pieces."—John Gribbin, New Scientist