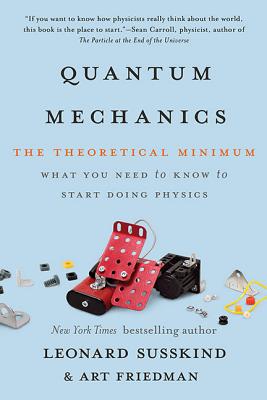 
Usually Ships in 1-5 Days
From the bestselling author of The Theoretical Minimum, a DIY introduction to the math and science of quantum mechanics.

First he taught you classical mechanics. Now, physicist Leonard Susskind has teamed up with data engineer Art Friedman to present the theory and associated mathematics of the strange world of quantum mechanics.

In this follow-up to the New York Times best-selling The Theoretical Minimum, Susskind and Friedman provide a lively introduction to this famously difficult field, which attempts to understand the behavior of sub-atomic objects through mathematical abstractions. Unlike other popularizations that shy away from quantum mechanics' weirdness, Quantum Mechanics embraces the utter strangeness of quantum logic. The authors offer crystal-clear explanations of the principles of quantum states, uncertainty and time dependence, entanglement, and particle and wave states, among other topics, and each chapter includes exercises to ensure mastery of each area. Like The Theoretical Minimum, this volume runs parallel to Susskind's eponymous Stanford University-hosted continuing education course.

An approachable yet rigorous introduction to a famously difficult topic, Quantum Mechanics provides a tool kit for amateur scientists to learn physics at their own pace.
Leonard Susskind is the Felix Bloch Professor in Theoretical Physics at Stanford University. He is the author of Quantum Mechanics (with Art Friedman) and The Theoretical Minimum (with George Hrabovsky), among other books. He lives in Palo Alto, California.

Art Friedman is a data consultant who previously spent fifteen years at Hewlett-Packard as a software engineer. A lifelong student of physics, he lives in Mountain View, California.
"If you're ever banished to a desert island and allowed to take just one book, here it is. Given enough time, with no distractions, you could use it to eventually master quantum mechanics."—Science News

"Susskind and Friedman's persuasive overview--and their insistence on explaining...exactly what it is that is strange about quantum mechanics--may be just what is needed."—Nature

"If you want to know how physicists really think about the world, this book is the place to start."—Sean Carroll, author of The Particle at the End of the Universe