Strange Rebels: 1979 and the Birth of the 21st Century (Paperback) 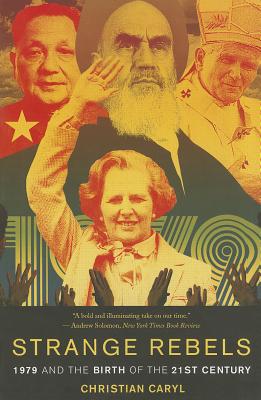 Few moments in history have seen as many seismic transformations as 1979. That single year marked the emergence of revolutionary Islam as a political force on the world stage, the beginning of market revolutions in China and Britain that would fuel globalization and radically alter the international economy, and the first stirrings of the resistance movements in Eastern Europe and Afghanistan that ultimately led to the collapse of the Soviet Union. More than any other year in the latter half of the twentieth century, 1979 heralded the economic, political, and religious realities that define the twenty-first.

In Strange Rebels, veteran journalist Christian Caryl shows how the world we live in today -- and the problems that plague it -- began to take shape in this pivotal year. 1979, he explains, saw a series of counterrevolutions against the progressive consensus that had dominated the postwar era. The year's epic upheavals embodied a startling conservative challenge to communist and socialist systems around the globe, fundamentally transforming politics and economics worldwide. In China, 1979 marked the start of sweeping market-oriented reforms that have made the country the economic powerhouse it is today. 1979 was also the year that Pope John Paul II traveled to Poland, confronting communism in Eastern Europe by reigniting its people's suppressed Catholic faith. In Iran, meanwhile, an Islamic Revolution transformed the nation into a theocracy almost overnight, overthrowing the Shah's modernizing monarchy. Further west, Margaret Thatcher became prime minister of Britain, returning it to a purer form of free-market capitalism and opening the way for Ronald Reagan to do the same in the US. And in Afghanistan, a Soviet invasion fueled an Islamic holy war with global consequences; the Afghan mujahedin presaged the rise of al-Qaeda and served as a key factor -- along with John Paul's journey to Poland -- in the fall of communism.

Weaving the story of each of these counterrevolutions into a brisk, gripping narrative, Strange Rebels is a groundbreaking account of how these far-flung events and disparate actors and movements gave birth to our modern age.

Christian Caryl, a Senior Fellow at the Legatum Institute, is also a contributing editor at Foreign Policy, a regular contributor to the New York Review of Books, and a former Newsweek correspondent. Caryl is a senior fellow of the Center for International Studies at MIT and winner of an Overseas Press Club Award.