Brave New War: The Next Stage of Terrorism and the End of Globalization (Paperback) 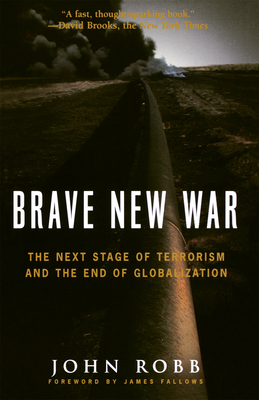 Brave New War: The Next Stage of Terrorism and the End of Globalization (Paperback)

"For my money, John Robb, a former Air Force officer and tech guru, is the futurists' futurist." -Slate

The counterterrorism expert John Robb reveals how the same technology that has enabled globalization also allows terrorists and criminals to join forces against larger adversaries with relative ease and to carry out small, inexpensive actions--like sabotaging an oil pipeline--that generate a huge return. He shows how combating the shutdown of the world's oil, high-tech, and financial markets could cost us the thing we've come to value the most--worldwide economic and cultural integration--and what we must do now to safeguard against this new method of warfare.

John Robb, a former U.S. counterterrorism operation commander and high-tech entrepreneur who now advises corporations, the Joint Chiefs of Staff, and the National Intelligence Council on the future intersection of terrorism, infrastructure, and markets. He is a graduate of Yale University and the Air Force Academy. His writings on war have appeared in thw New York Times and Fast Company.