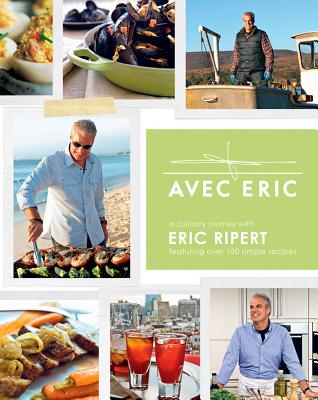 Based on his popular PBS TV program Avec Eric, this book follows culinary superstar Eric Ripert as he explores the culture and culinary traditions of regions around the world, then returns to his home kitchen to create dishes celebrating the bounty of each one. Mirroring the show's sense of adventure and deep appreciation for fresh, local, seasonal ingredients, this book is part travelogue, part cookbook, with 125 fresh, exciting recipes drawn from Ripert's journey through the culinary landscapes of regions from Tuscany to Sonoma to the Hudson River Valley. Food and travel photos throughout reflect Ripert's journey and highlight the inspirations behind each dish, while handwritten notes and hand-drawn illustrations give the book a uniquely personal feel.

The French chef Eric Ripert is executive chef at Le Bernardin in New York City. His cookbooks include Le Bernardin Cookbook, A Return to Cooking, On the Line, Avec Eric, and My Best.

"The 2003 Beard Foundation Outstanding Chef in the United States, Ripert presents this companion to his PBS television show of the same name. The simplicity and balance of flavors in this book are characteristic of the style that has earned Ripert’s Le Bernardin in New York City its reputation. Ripert describes his visits to 12 regions of the Western world and focuses on each area’s culture, natural crops, and local culinary delights. From Los Gatos, CA, to Tuscany, Italy, Ripert shares recipes, agricultural growing methods, and preparation, cooking, and serving ideas. Many recipes include a suggested wine or cocktail pairing. Though most dishes are appropriate for luncheon or dinner, a few breakfast items are included. VERDICT Resplendent with photos of fields, orchards, beaches, farmer’s markets, beautiful dishes, and cheerful people cooking and enjoying food, this book will be a pleasure to browse, read, and use. Readers are left with a desire both to sample the 100-plus recipes and to visit the regions in which they were created. Highly recommended." (Library Journal, October 15, 2010) "Ripert, chef of the famed New York restaurant Le Bernardin and author of On the Line, takes readers on a culinary journey from Italy to California in this companion piece to his PBS series of the same name.... The roasted pork loin with wild mushrooms, garlic, and sage pan jus from Tuscany will tempt even the most faithful of vegans, while heirloom tomato salad with black garlic and white balsamic, and white asparagus with anchovy-herb butter, both from Los Gatos in California, proclaim the supremacy of vegetables ... the array of appetizing dishes that Ripert offers is worth the price." (Publishers Weekly, September 20, 2010) —