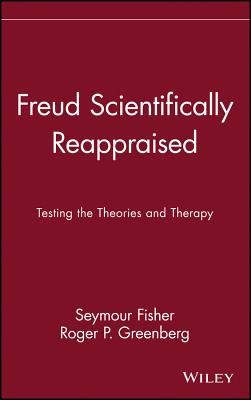 It would be impossible to tabulate fully the debt modern psychology owes to Sigmund Freud. Freud's theories of the unconscious, the role of parents in personality development, psychological defense mechanisms, psychosomatic symptoms, body image, and sexual behavior patterns, to name just a few, continue to exert a powerful influence on most contemporary schools of psychological thought. So, too, elements of the original psychoanalytic method have become a fixture in the modern psychotherapeutic armamentarium. But, as the authors of this book point out, Freud's approach was more intuitive than scientific, and his work less a rigorous system than a collection of "mini-theories," some of which have stood the test of time and scientific scrutiny, while others have not. For obvious reasons, then, it is important that Freud's theories and methods be periodically reappraised and revised in light of the latest empirical findings, and that they be closely evaluated for their relevance to the contemporary psychological scene.

Freud Scientifically Reappraised represents Seymour Fisher and Roger Greenberg's on-going efforts to do precisely that. Like their landmark work of the 1970s, The Scientific Credibility of Freud's Theories and Therapy, it is based on the authors' critical review of all studies conducted over the past decade that either directly or indirectly tested the validity of Freud's theories of psychopathology, personality types, Oedipal dynamics, and the nature of the dream process, or the efficacy of psychoanalytic therapy. While their research focused mainly on sources in social, clinical, cognitive, developmental, physiological, and other psycho-logical schools of thought, it also extended to the recent literature in anthropology, sociology, psychiatry, psychosomatic medicine, and other outside disciplines.

In this book Ralph Slovenko, a professor of law and psychiatry, explores the cases, origins, links, and requirements of legal insanity tests. Dr. Slovenko addresses a wide range of important topical issues such as the distinction between the defenses of not guilty by reason of insanity, guilty but mentally ill, and diminished capacity. He identifies the types of mental illness that fall under criminal responsibility and explores the role of the mental health professional as an expert character witness. This thought-provoking book will help mental health and legal professionals deal with the controversial question of what makes a person criminally responsible or criminally insane. 1994 (0-471-05425-9) 448 pp.

A PERILOUS CALLING: The Hazards of Psychotherapy Practice

Edited by Michael B. Sussman

Through a series of compelling first-person narratives, this fascinating book takes a revealing look into the private and professional lives of psychotherapists. This candid approach reveals not only the perils of the job, but the effects that dealing with the emotional and mental sufferings of others may have on the psychotherapist. This book will help professionals learn how to take better care of themselves in their professional and private lives and help their patients, friends, and loved ones gain some insight into the psychotherapists' own concerns and conflicts. 1995

PSEUDOSCIENCE IN BIOLOGICAL PSYCHIATRY: Blaming the Body--Colin A. Ross and Alvin Pam

Pseudoscience in Biological Psychiatry is a groundbreaking book that explores cutting-edge issues like the historical origins of biological psychiatry, genetics and mental illness, the current state of psychiatric training, psychopharmacology and drug therapy, and more. Instead of limiting the origins of mental illnesses to chemical or physical influences, this book takes into account the possibility of illnesses stemming from outside influences as well. This book alerts the mental health community to the ideological blind spots and conceptual errors in the basic logic and methodology of biological psychiatry and suggests alternative approaches to understanding and treating mental illness. 1994 (0-471-00776-5) 304 pp.

As will be apparent to all those versed in Freudian theory, throughout Freud Scientifically Reappraised, the authors scrupulously avoid the common tendency to oversimplify the theories in order to make them easier to test empirically, but instead present them in their full complexity as formulated by Freud. Readers from all backgrounds will appreciate the effort made to relate Freud's concepts and methods to personality and cognitive literature in order to provide a framework for integrating them into contemporary thought and practice.

Freud Scientifically Reappraised is must reading for psychologists, psychoanalysts, psychiatrists, and all mental health workers who acknowledge the enduring influence of and debt owed to the "Father of Psychoanalysis."

Upon its publication, The Scientific Credibility of Freud's Theories and Therapy was named one of the 10 best books in psychology by Library Journal and one of the "Best Behavioral Science Books" by Psychology Today.

SEYMOUR FISHER, PhD, is Professor of Psychology at the StateUniversity of New York Health Science Center in Syracuse, New York.Dr. Fisher received his doctorate in clinical psychology from theUniversity of Chicago. His other books include Development andStructure of the Body Image, Sexual Images of the Self, and ThePsychology of Adaptation to Absurdity. ROGER P. GREENBERG, PhD, is Professor and Head of the Division ofClinical Psychology in the Department of Psychiatry at the StateUniversity of New York. He also has an active private practice. Dr.Greenberg received his doctorate in clinical psychology fromSyracuse University. His other books include The ScientificCredibility of Freud's Theories and Therapy (with Seymour Fisher)and The Limits of Biological Treatments for Psychological Distress: Comparisons with Psychotherapy and Placebo.