The Gods of the Egyptians, Volume 1: Volume 1 (Paperback) 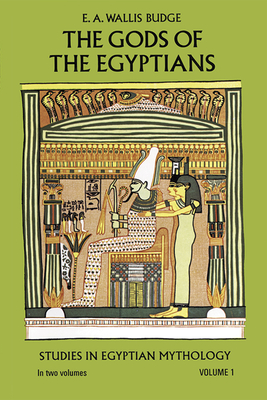 This is book number 1 in the Egypt series.

Thoth, the ibis-headed god of wisdom, inventor of the art of writing; Osiris, the dead god who arose and set the pattern for death-and-resurrection gods ever since; Isis, the great mother, wandering through the reed swamps; Anubis, conductor of the dead, with jackal head; Bast, the cat goddess; Set, the evil serpent; Ptah, the living mummy ... For more than 2,500 years, since the days of Herodotus, students have found the gods of Ancient Egypt a source of fascination and wonder. Strange beings who lived in a world of their own (as opposed to the human gods of the European people), irrational powers and menaces, sometimes animal-like, sometimes superhuman, sometimes incalculable in their evil potentialities, they still have the power to move men's thought.
By far the most thorough, most useful coverage of the gods of Ancient Egypt is this book by Dr. Budge of the British Museum, one of the foremost Egyptologists of the century. In it is presented practically everything known about the high gods, the local gods, demigods, demons, and mythological figures of Khem. Dr. Budge provides full information on the origins of the ancient religion; its peculiarly Egyptian aspects; evolution of cults, rites, and gods; the priesthoods; the heretical aberration of Ikhnaten and the Aten cult; the cult of Osiris; the Book of the Dead and its rites; the sacred animals and birds; heaven and hell, and much other secret wisdom that has been discovered hidden in mummy cases or written on tomb walls. The text is profusely illustrated, with many reproductions of tomb and mummy-case paintings, while many full texts are presented, with both hieroglyphs and translation.
Dr. Budge's book is a standard work in the history of religion. It is also a most useful background book for anyone seriously interested in the life and thought of Ancient Egypt, an explicator of many of the obscurer passages in the Book of Dead.