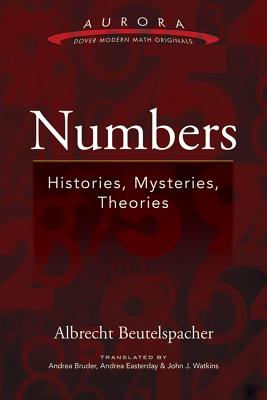 
Usually Ships in 1-5 Days
Posing the question What exactly is a number? a distinguished German mathematician presents this intriguing and accessible survey. Albrecht Beutelspacher ― founder of the renowned interactive mathematics museum, Mathematikum ― characterizes the wealth of experiences that numbers have to offer. In addition, he considers the many things that can be described by numbers and discusses which numbers possess special fascinations and pose lasting mysteries.
Starting with natural numbers, the book examines representations of numbers, rational and irrational numbers, transcendental numbers, and imaginary and complex numbers. Readers will explore the history of numbers from Pythagoras to Fermat and discover such practical applications as cryptography and barcodes. A thoughtful and enlightening introduction to the past, present, and future of numbers, this volume will captivate mathematicians and nonmathematicians alike.

German mathematician Albrecht Beutelspacher is well known in his native country as a writer of books on popular science and recreational mathematics. He is also the founder of Germany's first math museum, the Mathematikum.