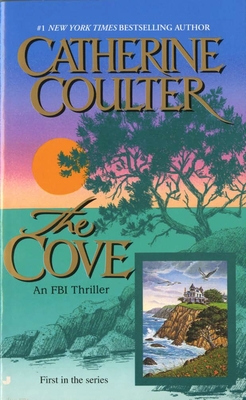 This is book number 1 in the An FBI Thriller series.

Sally Brainerd can't remember what happened the night her father was murdered. Maybe she did it. Or maybe it was her poor, traumatized mother. Either way, the safest place for her is far away from Washington, D.C.. But while her aunt's home in The Cove should be a quiet refuge, Sally can't shake the feeling that there's something not quite right about the postcard perfect little town.

Despite his target's checkered past and convenient memory loss, FBI Special Agent James Quinlan isn't convinced she's the killer—but maybe she knows who is. As he uses his cover to get close to Sally and unearth the memories her mind has hidden away, James can't deny his connection to the troubled woman. But as their lies and passions intertwine, Sally and James soon learn they aren't the only ones keeping deadly secrets in The Cove...
Catherine Coulter is the #1 New York Times bestselling author of the FBI Thrillers featuring husband and wife team Dillon Savich and Lacey Sherlock. She is also the author—with J. T. Ellison—of the Brit in the FBI series. She lives in Sausalito, California.
Praise for The Cove

“This terrific thriller will drag you into its chilling web of terror and not let go until the last paragraph…A ripping good read.”—The San Francisco Examiner

“A good storyteller...Coulter always keeps the pace brisk.”—Fort Worth Star-Telegram

“Fast-paced, romantic...Coulter gets better and more cinematic with each of her suspenseful FBI adventures.”—Booklist