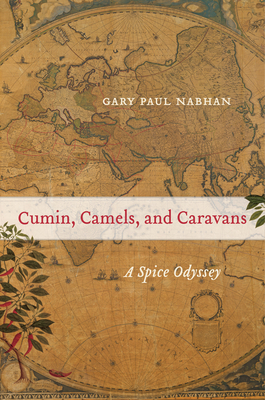 Gary Paul Nabhan takes the reader on a vivid and far-ranging journey across time and space in this fascinating look at the relationship between the spice trade and culinary imperialism. Drawing on his own family’s history as spice traders, as well as travel narratives, historical accounts, and his expertise as an ethnobotanist, Nabhan describes the critical roles that Semitic peoples and desert floras had in setting the stage for globalized spice trade.

Traveling along four prominent trade routes—the Silk Road, the Frankincense Trail, the Spice Route, and the Camino Real (for chiles and chocolate)—Nabhan follows the caravans of itinerant spice merchants from the frankincense-gathering grounds and ancient harbors of the Arabian Peninsula to the port of Zayton on the China Sea to Santa Fe in the southwest United States. His stories, recipes, and linguistic analyses of cultural diffusion routes reveal the extent to which aromatics such as cumin, cinnamon, saffron, and peppers became adopted worldwide as signature ingredients of diverse cuisines. Cumin, Camels, and Caravans demonstrates that two particular desert cultures often depicted in constant conflict—Arabs and Jews—have spent much of their history collaborating in the spice trade and suggests how a more virtuous multicultural globalized society may be achieved in the future.

Gary Paul Nabhan is an Ecumenical Franciscan Brother, MacArthur "genius" award winner, and ethnobotanist of Arab-American descent. His food and farming books include Food from the Radical Center, Where Our Food Comes From, and the forthcoming Jesus for Farmers and Fishers.

"Richly embroidered with detail, Cumin, Camels, and Caravans by scholar Gary Paul Nabhan is part history, part geography, part cookbook, and part travel memoir. . . . Interspersed with recipes from various stops on historical spice routes, Nabhan discusses the botany, linguistic history, and trade history of each substance, but far from being dry accounts, they bring the wonder of many ingredients we now view as commonplace into focus; Nabhan's painstaking research has not eclipsed an evident natural knack for storytelling."
— Saveur

"Nabhan is the ideal travelling companion. With an ancestry that stretches back to the spice-trading Nabheni tribe of Oman, Nabhan is by profession an ethnobotanist and food writer with a clutch of culinary history books under his belt. And he wears his erudition lightly. Although the book is referenced like an academic tome, it reads like a detective story – albeit one with generous pinches of exotic smells and alluring flavours thrown in.  Spiced locusts, anyone?"
— History Today

"Gary Paul Nabhan, a food scholar and prolific author, is the guide on a journey that also travels through subjects as diverse as botany and archaeology. Even when following well-worn paths, he is never a dull host. . . . While the book is ostensibly about spices, what holds it together is a deeper sense of distance from nature and the deep past, a force that continues to impel pilgrims, travellers and even foodies towards distant and exotic places."
— Times Higher Education

"...a worthwhile read. Nabhan achieved what he set out to in this book, and brings to light a cultural historical geography of spices and people that has not, to my knowledge, been pulled together in quite the way he has done before."
— AAG Review of Books

"This book is a singular achievement . . . . A most absorbing book and highly recommended."