The Mathematics of Oz: Mental Gymnastics from Beyond the Edge (Paperback) 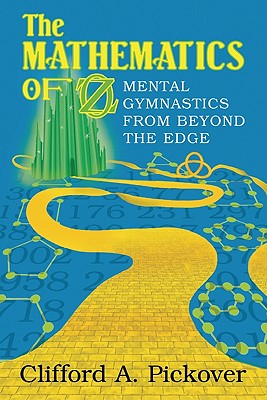 The Mathematics of Oz: Mental Gymnastics from Beyond the Edge (Paperback)

By Clifford a. Pickover


Usually Ships in 1-5 Days
Grab a pencil. Relax. Then take off on a mind-boggling journey to the ultimate frontier of math, mind, and meaning as acclaimed author Clifford Pickover, Dorothy, and Dr. Oz explore some of the oddest and quirkiest highways and byways of the numerically obsessed. The thought-provoking mysteries, puzzles, and problems range from zebra numbers and circular primes to Legion's number--a number so big that it makes a trillion pale in comparison. The strange mazes, bizarre consequences, and dizzying arrays of logic problems entertain readers at all levels of mathematical sophistication. The tests devised by enigmatic Dr. Oz to assess human intelligence will tease the brain of even the most avid puzzle fan. They feature a host of mathematical topics: geometry and mazes, sequences, series, sets, arrangements, probability and misdirection, number theory, arithmetic, and even several problems dealing with the physical world. With numerous illustrations, this is an original, fun-filled, and unusual introduction to numbers and their role in creativity, computers, games, practical research, and absurd adventures that teeter on the edge of logic and insanity. Clifford A. Pickover is the author of over twenty highly acclaimed books on such topics as computers and creativity, art, mathematics, black holes, human behavior and intelligence, time travel, alien life, and science fiction. Among his books are Computers, Pattern, Chaos, and Beauty (St. Martin's Press, 1990), Wonders of Numbers (Oxford University Press, 2000), Dreaming the Future (Prometheus, 2001), The Zen of Magic Squares, Circles, and Stars (Princeton University Press, 2001), The Stars of Heaven (Oxford University Press, 2001), The Paradox of God and the Science of Omniscience (Palgrave, 2002). A Ph.D. graduate of Yale University, he is a prolific inventor with dozens of patents, the associate editor for several journals, the author of colorful puzzle calendars, and puzzle contributor to adult and children's magazines. Pickover's computer graphics have been featured on the cover of many popular magazines and on T.V. shows.