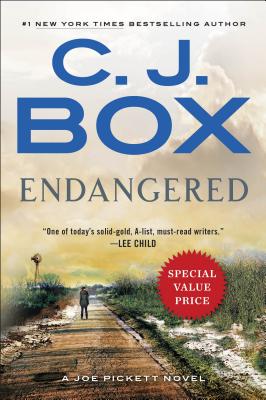 This is book number 15 in the A Joe Pickett Novel series.

In this New York Times bestseller, Wyoming game warden Joe Pickett is determined to find out who put his daughter’s life in danger—even if it kills him.

Joe Pickett had good reason to dislike Dallas Cates, and now he has even more—Joe’s eighteen-year-old daughter, April, has run off with him. And then comes even worse news: She has been found in a ditch along the highway—alive, but just barely, the victim of blunt force trauma. Cates denies having anything to do with it, but Joe knows in his gut who’s responsible. What he doesn’t know is the kind of danger he’s about to encounter. Cates is bad enough, but Cates’s family is like none Joe has ever met.

C. J. Box is the #1 New York Times bestselling author of the Joe Pickett series, five stand-alone novels, and the story collection Shots Fired. He has won the Edgar, Anthony, Macavity, Gumshoe, and two Barry awards, as well as the French Prix Calibre .38 and a French Elle magazine literary award. His books have been translated into twenty-seven languages. He and his wife Laurie split their time between their home and ranch in Wyoming.

“All the action and suspense of Box’s long string of high-country adventures. Endangered is one of Joe’s best.”—Kirkus Reviews (starred review)

“Is there a crime-fiction family as fully fleshed out as Joe Pickett’s? In singing the praises of Box’s series, we often praise the plotting, pacing, and the down-to-earth hero’s friendship with force-of-nature Nate Romanowski. But Pickett’s supporting cast lends a continuity and grounding to this series that sets it apart from all the lone-wolf stuff out there. A carefully constructed plot building to a breathless, thrilling end.”—Booklist

“Series fans will love this thriller. The nonstop action, intermingling plotlines, and the return of familiar characters all mesh into a breathless, roller-coaster ride of sheer suspense and entertainment.”—Library Journal

“An edge-of-the-seat thriller. A tightly coiled plot that springs from surprise to surprise.”—South Florida Sun-Sentinel

More Praise for the C. J. Box and the Joe Pickett novels

“Picking up a new C. J. Box thriller is like spending quality time with family you love and have missed...It’s a rare thriller series that has characters grow and change. An exciting reading experience for both loyal fans as well as newcomers.”—Associated Press

“Box knows what readers expect and delivers it with a flourish.”—Cleveland Plain Dealer

“Will keep you on the edge of your seat.”—The Philadelphia Enquirer