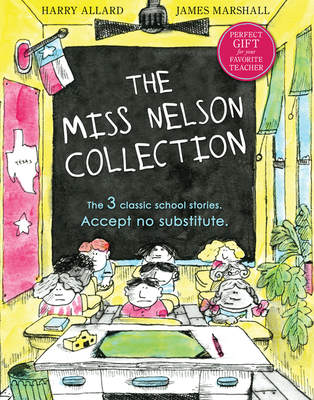 For the first time ever, Miss Nelson Is Missing!, Miss Nelson Is Back, and Miss Nelson Has a Field Day are available in one volume. This comical, collectable treasury of stories is a must-have for teachers and their mischievous students everywhere.

More than forty years ago Viola Swamp slinked into Room 207 at Horace B. Smedley School and whipped Miss Nelson's terrible, rude, worst-class-in-the-whole-school students into shape. In the intervening generations since the publication of Miss Nelson Is Missing!, millions of children have been fascinated by the legend of Miss Swamp.

A diabolical creation from the minds of Harry G. Allard and James Marshall, Miss Nelson's alter ego illuminates the folly of misbehavior through amazing feats of disguise. And she's never been more hilarious than now!

Harry Allard (1928-2017) was the author of many hilarious books for children, including several Miss Nelson and Stupid Family titles, all illustrated by James Marshall.

James Marshall (1942–1992) created dozens of exuberant and captivating books for children, including The Stupids, Miss Nelson Is Missing!, and the ever-popular George and Martha books. Before creating his canon of classic, hilarious children’s books, James Marshall played the viola, studied French, and received a master’s degree from Trinity College. He also doodled. It was the doodles, and the unforgettable characters that emerged from them, that led him to his life’s work as one of the finest creators of children’s books of the twentieth century. In 2007, James Marshall was posthumously awarded the Children's Literature Legacy Award for his lasting contribution to literature for children.