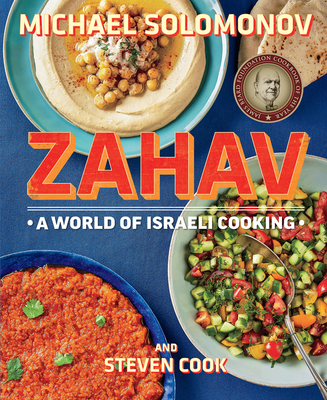 James Beard Book of the Year and Best International Cookbook (2016)

Ever since he opened Zahav in 2008, chef Michael Solomonov has been turning heads with his original interpretations of modern Israeli cuisine, attracting notice from the New York Times, Bon Appétit, ("an utter and total revelation"), and Eater ("Zahav defines Israeli cooking in America").
Zahav showcases the melting-pot cooking of Israel, especially the influences of the Middle East, North Africa, the Mediterranean, and Eastern Europe. Solomonov's food includes little dishes called mezze, such as the restaurant's insanely popular fried cauliflower; a hummus so ethereal that it put Zahav on the culinary map; and a pink lentil soup with lamb meatballs that one critic called "Jerusalem in a bowl."  It also includes a majestic dome of Persian wedding rice and a whole roasted lamb shoulder with pomegranate and chickpeas that's a celebration in itself. All Solomonov's dishes are brilliantly adapted to local and seasonal ingredients.
Zahav tells an authoritative and personal story of how Solomonov embraced the food of his birthplace. With its blend of technique and passion, this book shows readers how to make his food their own.

MICHAEL SOLOMONOV, the executive chef of Zahav, named an “essential” restaurant by Eater, is the 2017 James Beard Outstanding Chef in America and the 2016 Eater Chef of the Year. STEVEN COOK, his business partner, and SOLOMONOV wrote Federal Donuts and the award-winning Zahav. Together, they own Zahav, Federal Donuts, Abe Fisher, Dizengoff, The Rooster, and Goldie restaurants.

James Beard Book of the Year and Best International Cookbook (2016)   "After stints working with chef Marc Vetri in Philadelphia and as head chef at Marigold Kitchen, Solomonov developed a passion for Israeli cooking and his desire to show the full breadth of the cuisine began to take shape; he started his own restaurant, Zahav, in Philadelphia in 2008. Six years later, he won the James Beard award for best chef in the Mid-Atlantic region. Solomonov shares his story as well as his wide-ranging approach to Israeli cuisine in this impressive collection of recipes that are sure to challenge readers’ preconceptions. In addition to kibbe, kugel, latke, and rugelach, Solomonov offers chicken albondigas, the Spanish tapas standard; cashew baklava cigars; and the Chocolate Almond Situation, his riff on the flourless chocolate cake. To these stunningly simple dishes he adds deliciously decadent fare such as duck and foie gras kebabs, and beluga lentil soup with marrow bones. Solomonov isn’t one for showmanship (or waste—the juices from his Israeli salad of cucumber, tomato, parsley and lemon are added to gin to create an unusual martini), and virtually all the book’s recipes are within the reach of novice cooks. The reader’s biggest challenge will likely be mastering the ubiquitous tehina sauce used as a foundation for hummus and as an accent in countless dishes. Readers with an adventurous palate and an open mind will be richly rewarded by this terrific debut."  —Publisher's Weekly, starred review   "Zahav’s modern approach to Israeli cooking makes for the kind of book that will redefine the conversation around Middle Eastern cuisine in America.” —EATER.com   “Each of Michael Solomonov’s soulful recipes feels created by someone impassioned by one of the world's most exciting cuisines – a master of his craft. I’m smitten!” — Gail Simmons, TV Host, author, Talking With My Mouth Full     “Cooking is how Michael found himself, changed his life, and then the world around him. Michael writes that ‘nothing in my life happened the way it was supposed to.’  He means life in its beauty and its awful brutality. I think that his life and most importantly this book, is beshert, ‘meant to be.’ I believe his Zahav will be one of the most cherished books in years, with staggeringly delicious recipes from one of the brightest lights in our culinary world. I believe this book will be beshert for you too.” — Andrew Zimmern, chef, anthropologist, global thought leader     “Zahav is the most honest chef’s cookbook I have read in a long time. Mike’s soulful depiction of his life delivers the same heart and intelligence that emanates from his restaurant. Zahav is essential reading for anyone who wants to make the food of Israel —or Philadelphia— today.” — Joan Nathan, author, The Foods of Israel Today     “Zahav has become a staple of my Philly restaurant experience, but staples only hold pages down. Here at last are pages —and pages — of Michael Solomonov’s thinking on food, community, and the recipes that get me back to Zahav every time.”  — Questlove      “I’m excited to have Zahav, a compendium of Chef Solomonov’s recipes, so I can recreate them.” — David Lebovitz, author, My Paris Kitchen     “The great thing about Michael Solomonov is that he simply cook —