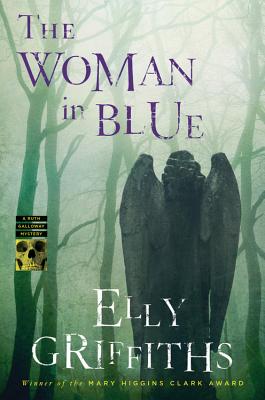 This is book number 8 in the Ruth Galloway Mysteries series.

In the next Ruth Galloway mystery, a vision of the Virgin Mary foreshadows a string of cold-blooded murders, revealing a dark current of religious fanaticism in an old medieval town.

Known as England’s Nazareth, the medieval town of Little Walsingham is famous for religious apparitions. So when Ruth Galloway’s druid friend Cathbad sees a woman in a white dress and a dark blue cloak standing alone in the local cemetery one night, he takes her as a vision of the Virgin Mary. But then a woman wrapped in blue cloth is found dead the next day, and Ruth’s old friend Hilary, an Anglican priest, receives a series of hateful, threatening letters. Could these crimes be connected? When one of Hilary’s fellow female priests is murdered just before Little Walsingham’s annual Good Friday Passion Play, Ruth, Cathbad, and DCI Harry Nelson must team up to find the killer before he strikes again.

"I absolutely devoured Elly Griffiths’ THE WOMAN IN BLUE, the eighth book in a series featuring archaeologist Ruth Galloway, reading it cover to cover in a feverish weekend...Griffiths’ fluidity of style and pacing has grown organically since the first book in the series, THE CROSSING PLACES...this book and the entire series is a joy to read. Fast-paced, strong dialogue, believable and likable characters, and intriguing historical set pieces all combine to make the Ruth Galloway books a great series to collect for your mystery library."--Mark Rose, Bookgasm   "The discovery of a woman’s body dumped in a ditch near the village of Walsingham kick-starts Griffiths’s satisfying eighth Ruth Galloway mystery set in Norfolk, England (after 2015’s The Ghost Fields). Det. Chief Insp. Harry Nelson, who heads the Serious Crimes Unit, learns that the victim, Chloe Jenkins, was receiving treatment at a local drug and alcohol rehabilitation center. Meanwhile, Ruth, a forensic archeologist, receives a plea for help from an acquaintance, Hilary Smithson. Hilary, an Anglican vicar, tells Ruth that she has received threatening letters from someone who’s against women joining the priesthood. As the hunt for Chloe’s murderer begins, a second body turns up, and Nelson—with Ruth’s aid—searches for a link between the two crimes. They share a personal story, too, and their uneasy relationship adds a domestic element to the unfolding drama. Griffiths expertly conveys the mysteries of a particular brand of Christianity that’s drawn to physical manifestations of spirituality, ancient relics, and the stubbornly corporeal."--Publishers Weekly   "A murderer stalks the streets of a medieval town known for its religious fervor. A woman's body has been found strangled outside the village of Walsingham. DCI Harry Nelson's friend Cathbad, a druid and mystic catsitting at a nearby cottage, saw the woman, dressed in blue and white and reminiscent of the Virgin Mary, standing in the cemetery earlier that night. It turns out that Chloe Jenkins, a resident of The Sanctuary, where she was being treated for drug addiction, had been scrubbing clean the grave of a woman who had once been her minder and foster mother to a large number of children. Nelson's fling with archaeologist Ruth Galloway, a police consultant, produced a child he spends time with despite remaining married to his stunning wife, Michelle. Ruth becomes involved in the current case when a university friend, Hilary Smithson, asks to meet her at Walsingham, where she'll be attending a conference. Hilary, a priest, has been getting letters railing against women in the clergy, the last with a distinctly sinister tone. As Nelson searches for clues to the murder, he learns that Michelle's been seeing one of his sergeants. He himself is still a little in love with Ruth, who tries not to admit to herself that she loves him. When Michelle barely escapes death at the hands of the strangler and one of the other female priests is strangled, it's hard not to notice that all the victims were attractive blue-eyed blondes. Since religion seems to play a role in the murders, Ruth wonders if a part of a missing, broken vial that supposedly contained breast milk from the Virgin Mary is the key to the case. Griffiths (The Ghost Fields, 2015, etc.) always provides a clever mystery and a wealth of historical detail. But it's her complex characterizations that put her in the forefront of the current mystery field."--Kirkus Reviews