Steering The Craft: A Twenty-First-Century Guide to Sailing the Sea of Story (Paperback) 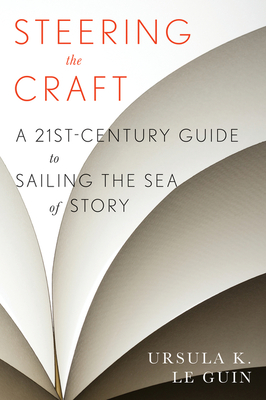 Steering The Craft: A Twenty-First-Century Guide to Sailing the Sea of Story (Paperback)


Usually Ships in 1-5 Days
From the celebrated Ursula K. Le Guin, "a writer of enormous intelligence and wit, a master storyteller" (Boston Globe), the revised and updated edition of her classic guide to the essentials of a writer's craft.

Completely revised and rewritten to address modern challenges and opportunities, this handbook is a short, deceptively simple guide to the craft of writing.

Le Guin lays out ten chapters that address the most fundamental components of narrative, from the sound of language to sentence construction to point of view. Each chapter combines illustrative examples from the global canon with Le Guin’s own witty commentary and an exercise that the writer can do solo or in a group. She also offers a comprehensive guide to working in writing groups, both actual and online.

Masterly and concise, Steering the Craft deserves a place on every writer's shelf.

Ursula Kroeber Le Guin (1929-2018) was a celebrated author whose body of work includes 23 novels, 12 volumes of short stories, 11 volumes of poetry, 13 children’s books, five essay collections, and four works of translation. The breadth and imagination of her work earned her six Nebula Awards, seven Hugo Awards, and SFWA’s Grand Master, along with the PEN/Malamud and many other awards. In 2014 she was awarded the National Book Foundation Medal for Distinguished Contribution to American Letters, and in 2016 joined the short list of authors to be published in their lifetimes by the Library of America.

"A must-read for intermediate and advanced writers of fiction and memoir." —Library Journal, STARRED  "A succinct, clear, and encouraging companion for aspiring writers." —Kirkus Reviews "It would be churlish to deny the benefits of this thoughtful, concise volume...In essence, Le Guin reveals the art of craft and the craft of art...this book is a star by which to set one's course." —Publishers Weekly, STARRED  “There is no better spirit in all of American letters than that of Ursula Le Guin.” — Slate     “Le Guin is a writer of enormous intelligence and wit, a master storyteller with the humor and force of a Twain. She creates stories for everyone from New Yorker literati to the hardest audience, children. She remakes every genre she uses.” — Boston Globe  —