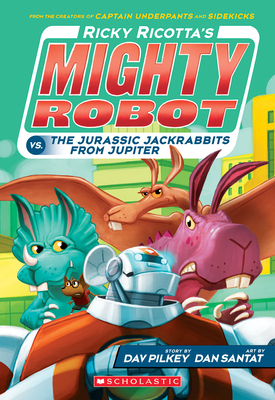 From Dav Pilkey, creator of Captain Underpants, and acclaimed artist Dan Santat, an out-of-this-world friendship adventure with all-new full-color illustrations!
Ricky Ricotta and his Mighty Robot are ready for the best day ever!

Today is Ricky's birthday, and it's off to a great start! After peanut-butter pancakes and presents, Ricky's parents are taking him and his Mighty Robot to see dinosaurs at the museum. And they have a surprise for Ricky: His cousin, Lucy, is coming with them! Ricky thinks Lucy is a real pest. Suddenly, things aren't looking so sunny anymore.

At the museum, there is another surprise in store. General Jackrabbit, an evil genius from the planet Jupiter, is jumping for joy! He has just created three Jurassic Jackrabbits to help him take over Earth. Can Ricky and his Robot beat these big, bad bunnies? Or will this end up the WORST birthday ever?

DAV PILKEY is the creator of many acclaimed children's books, including Dogzilla, Kat Kong, god bless the gargoyles, and the bestselling Captain Underpants series. His book The Paperboy received a Caldecott Honor. He lives in the Pacific Northwest. www.pilkey.com

Praise for the Ricky Ricotta series:

"This reboot... offer[s] a new generation of readers a fun introduction to chapter books... Newly independent readers and Pilkey fans alike will not be disappointed by the humorous ride." -- School Library Journal

"Aimed at a younger audience than the wildly popular Captain Underpants books, this series... has all the classic Pilkey hallmarks: comic book panels, superhero action, and flip-o-rama." -- Booklist