The Quest of the Cubs (Bears of the Ice #1) (Hardcover) 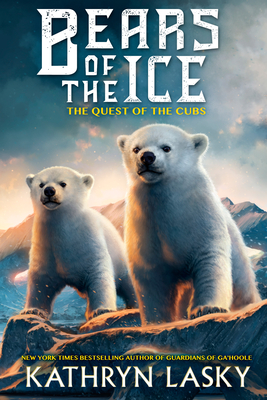 Perfect for fans of His Dark Materials! A gripping adventure where "nature, magic, and legend combine to create a world like no other." -- Kirkus Reviews, starred review
For generations, the noble polar bears have ruled the Northern Kingdoms. But now, their society is on the brink of collapse. A group of power-hungry bears has seized control, and darkness is creeping across the snow.

Cubs First and Second don't know any of this. Although they're twins, they couldn't be more different. First loves imagining stories, while his daring sister, Second, wants to live them.

When their mother is taken prisoner, the cubs' world falls apart. They know they have to rescue her, but how can two cubs who've barely learned to hunt survive a treacherous journey across the ice? Their only chance is to learn to trust each other and--even more important--trust themselves.

But survival is only the beginning. And soon, these two unlikely heroes find themselves at the heart of a battle unlike anything Ga'hoole has ever seen.

Kathryn Lasky is the Newbery Honor-winning author of over 100 books for children and young adults. Her beloved Guardians of Ga'Hoole fantasy series has more than seven million copies in print, and she is the author of the Daughters of the Sea series and the Wolves of the Beyond series, as well as A Time for Courage and other Dear America titles. Kathryn has also written a number of critically acclaimed historical fiction titles, such as Beyond the Burning Time and True North. She lives with her husband in Cambridge, Massachusetts.

Praise for The Quest of the Cubs:

* "Nature, magic, and legend combine to create a world like no other." -- Kirkus Reviews, starred review

"Readers will lose themselves in the life-and-death adventure of the cubs and succumb to human feelings of fear, loss, and hope... They'll be waiting with bated breath for the next installment." -- Booklist

"The text is rich and blends fantasy with a realistic setting...A series opener that promises to deliver action and adventure." -- School Library Journal

Praise for The Den of Forever Frost:
*"Nonstop action, overwhelming odds, and a truly evil adversary will make readers clamor for the next installment... Proof that a sequel can shine just as brightly." -- Kirkus Reviews, starred review

"Lasky's brilliant imagery of the fantasy ice world and her believably strong, determined bears won't disappoint readers. The final paragraph brings sighs and silence as the bears contemplate the completion of their quest in the series' next book." -- Booklist


Praise for Horses of the Dawn: The Escape

"As in works such as her Guardians of Ga'hoole series, Lasky uses animals to touch on very human issues . . . Complex and distinctive characters offer a fresh view of familiar historical events. A promising start to a new series." -Kirkus Reivews

"Lasky successfully fuses fantasy and fact as she gives her equine characters credible emotional depth and underscores the tensions and disparity between Old and New World sensibilities. It's a haunting story of loss, self-discovery, survival, and homecoming." - Publishers Weekly

Praise for Guardians of Ga'Hoole: The Rise of A Legend
* "Lyze's story can be read easily as a stand-alone tale. . . . Both thoughtful and action-packed, this adventure illuminates the fantastical world that exists between dusk and dawn." -Kirkus Reviews, starred review